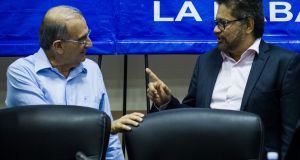 Colombia’s government and leftist Farc rebels agreed on Tuesday to ask the UN Security Council to help monitor and verify a rebel disarmament should the two sides reach a final peace deal to end their 50-year war.

“We have decided to request the Security Council of the UN to establish as of now such a political mission with unarmed observers for a period of 12 months,” the two sides said in a joint statement read in Havana, which has been the site of peace talks between both sides for the past three years.

Colombian president Juan Manuel Santos said last year he would make such a request of the UN.

The rebels’ willingness to make the request jointly with the government is a sign of progress, ahead of a March 23rd deadline to reach a comprehensive peace agreement that negotiators set last year.

The Colombians asked that the UN body be made up of representatives from Latin American and Caribbean countries.

The international monitors would verify a bilateral ceasefire, preside over Farc’s disarmament, settle any disputes and make recommendations, the statement said.

If needed, the international participation could be extended for another year.

Santos, who staked his 2014 re-election campaign on the peace talks, has been urgently pressing for a deal to end Latin America’s longest war, which has killed 220,000 and displaced millions since 1964.

The government and guerrillas of the Revolutionary Armed Forces of Colombia (Farc) reached a breakthrough in negotiations on September 23rd, when they set a six-month deadline for a final agreement, but Farc had indicated that March 23rd was an unrealistic target.

The talks appeared to regain momentum when Cuban president Raul Castro met with negotiators from both sides on Sunday.

Rebel leaders also travelled to Colombia last week to brief combatants in the mountains and jungles.

The final agenda point to be negotiated is on reaching a definitive bilateral ceasefire.

They have already reached partial agreements on justice, land reform, combating drug trafficking and legalising Farc as a political party.

Any comprehensive agreement would be placed before Colombian voters for approval.