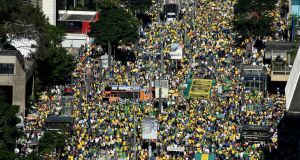 The crisis between Brazilian president Jair Bolsonaro and the country’s Congress looks set to intensify after large protests in favour of the far-right leader’s agenda also took aim at the legislature on Sunday.

Almost five months into his presidency Mr Bolsonaro’s agenda is largely stalled in Congress because of his refusal to negotiate with traditional parties he rejects as representatives of Brazil’s corrupt “old politics”.

This has denied him a majority to pass any legislation and to prevent Congress undoing key administrative changes he implemented by provisional presidential order.

Sunday’s marches in more than 100 cities across the country attracted a better turnout than expected, despite divisions in the president’s far-right base about the wisdom of calling supporters out into the streets after a chaotic five-month start to his term.

The president did not attend any of the rallies but spent Sunday sharing clips from them on social media, including one of a marcher demanding a congressional inquiry into corruption on the supreme court.

Mr Bolsonaro once again used social media to attack legislators as representatives of “old politics”, a move that does little to increase his chances of winning their backing, which is necessary to pass key legislation to battle corruption and pass a pension reform desperately needed to ease a looming fiscal crisis.

Justice minister Sergio Moro, the crusading judge who locked up several high profile politicians for corruption, including former left-wing president Luiz Inácio Lula da Silva, once again emerged as a hero for protesters, as he did during protests that led to the impeachment of Lula’s successor Dilma Rousseff.

But their efforts to get their flagship Bills through Congress will have been complicated after the president took to a national channel on Sunday night to say the “big-centre” bloc of centre-right parties in the lower house is “clientelistic” and a swear-word among voters.

The bloc’s leader Rodrigo Maia was a popular target of protesters’ ire. As president of the lower chamber, he exercises enormous influence over the progress of Bills through the chamber, and even before Sunday his relationship with the president and his supporters was tense.

The bloc’s leadership downplayed the importance of Sunday’s marches and criticised Mr Bolsonaro for further stimulating the confrontation between the executive and legislative. “This just stirs up animosity. This is a government that does not have any project or any proposals,” said Otto Alencar, leader of one of the bloc’s parties in the Senate.

As relations between the president and Congress have worsened in recent weeks there has been open talk in the capital Brasília about how to handle the volatile Mr Bolsonaro, who has often looked out of his depth in the presidency.

Already there has been open talk of possible impeachment as well as the revival of an old congressional ambition to curtail Brazil’s presidential system by imposing a so-called semi-parliamentary one, a move that would be fiercely opposed by the president’s supporters.