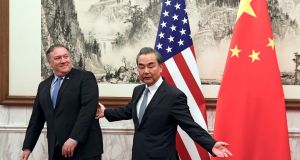 Chinese foreign minister Wang Yi with US secretary of state Mike Pompeo before a meeting at the Diaoyutai State Guesthouse in Beijing on Monday. Photograph: Andy Wong/Pool via Reuters

China’s foreign minister Wang Yi accused the US of making a direct attack on the relationship between the world’s two biggest economies as secretary of state Mike Pompeo arrived in Beijing for a visit he hoped would focus more on progress on North Korea.

After weeks of behind-the-scenes diplomacy on the denuclearisation of the Korean Peninsula, there has been apparent progress on allowing experts to visit nuclear sites, while North Korean leader Kim Jong-un is expected to visit Russia, China’s Xi Jinping will travel to Pyongyang and the spadework has been done for a second US-North Korea summit.

However, on arrival in Beijing it was the trade war tensions and recent accusations by vice-president Mike Pence that China was trying to meddle in the US mid-term elections that dominated their initial exchanges, as well as US arms sales to self-ruled Taiwan, which China considers an inviolable part of its territory.

“Recently, as the US side has been constantly escalating trade friction toward China, it has also adopted a series of actions on the Taiwan issue that harm China’s rights and interests, and has made groundless criticism of China’s domestic and foreign policies,” Mr Wang told a joint news conference with Mr Pompeo.

“We believe this has been a direct attack on our mutual trust, and has cast a shadow on China-US relations. We demand the US side stop this kind of mistaken action.”

In response, Mr Pompeo said the US and China had a “fundamental disagreement” on certain issues.

“We have great concerns about the actions that China has taken, and I look forward to having the opportunity to discuss each of those today because this is an incredibly important relationship,” he said.

Earlier, Mr Pompeo said Mr Kim had promised to let foreign inspectors visit the country’s key nuclear test site in Punggye-ri as soon as the logistics can be ironed out.

The North apparently blew up underground tunnels at the nuclear test site in Punggye-ri in May but did not invite outside experts. Verifiable disarmament is one of the chief conditions laid down by the US in the process of dismantling the North’s nuclear programme before it considers lifting economic sanctions.

Mr Pompeo said Washington and Pyongyang were “pretty close” to a time and location for a second bilateral summit, following the first meeting between Mr Kim and President Donald Trump in Singapore in June, but added: “Sometimes that last issue is hard to close.”

South Korean foreign minister Kang Kyung-wha said it seemed Mr Pompeo’s fourth trip to the North in less than a year had been a success and she noted the Trump administration was showing “lots of flexibility”.

Mr Moon told a cabinet meeting that Mr Kim would visit China soon, while Mr Xi would make his first visit to Pyongyang. Russia and China were key players in the long-stalled six-party talks that tried to find a way to halt North Korea’s nuclear plan.