Big industrial nations to meet against a background of global tension 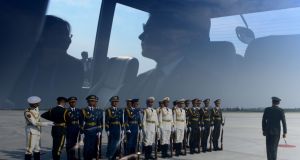 Chinese honour guards are reflected in the glass of a bus as they prepare for the arrival of Turkish president Recep Tayyip Erdogan at Hangzhou Xiaoshan International Airport in Hangzhou on Friday. World leaders are gathering in the city for the G20 summit. Photograph: Wang Zhao/AFP

In Hangzhou, the manhole covers are locked down, the Swat teams deployed, factories shuttered to guarantee blue skies and one-third of its six million people have left on a temporary holiday ahead of the G20 meeting.

Two motorised divisions of the People’s Armed Police, armoured vehicles and helicopters are watching over the meeting, which sees China in confident mood.

The G20 represents two-thirds of the global population and 85 per cent of the global economy, and China will hope to keep the focus on kick-starting growth.

However, the US, Japan and Germany have other questions, such as a Hague tribunal ruling against Beijing’s claims in the South China Sea, worsening trade relations, environmental issues and even, possibly, human rights.

“This G20 is primarily a story of two clashing narratives,” Kerry Brown, professor of Chinese studies and director of the Lau China Institute at King’s College, London, told The Irish Times.

“For China the G20 is Catch 22. Speak up, and they arouse fear. Keep silent and they arouse suspicion. In that context, the safest thing they can do is to pursue outcomes in areas which are widely understood to have international consensus, such as climate change and sustainability,” said Brown.

By holding the event in a second-tier city, Beijing wants Hangzhou – called “heaven on earth” in a proverb – to be a shop window for China’s remarkable rise, but also remind the world of its ancient heritage, as the capital of the southern Song Dynasty (1126-1279), a golden era in China history and commerce. These days, it’s a tourism magnet in booming Zhejiang province, home to tech giant Alibaba.

Under Xi’s leadership, China has undertaken a strong-arm crackdown on human rights. Since July last year, more than 130 attorneys and legal staff were detained or interrogated.

As this is almost certainly Obama’s last visit to China as president, there have been calls for him to raise human rights issues, such as the fate of his fellow Nobel laureate Liu Xiaobo, who is in jail on subversion charges.

Steve Tsang, professor of Contemporary Chinese Studies at the University of Nottingham, believes the summit is likely to skirt trickier issues.

“The top priority of China would be making the event a success, in order to showcase China’s place at the global top table. I don’t think Beijing will want anything that will embarrass itself, so South China Sea is most unlikely to be included on the agenda. Protectionism and the implications of Brexit might be included. But again, I doubt that we will get very far with them,” said Tsang.

“G20 is an opportunity to speak in the voice of the ‘Herald of the high frontier’, protector of the international order and provider of global public goods,” said Kelly.

In this context, the environment is a relatively safe subject.

Xi and Obama are expected to issue a joint communiqué underlining their commitment to the Paris agreement at their bilateral meeting on September 3rd but the advocacy group Greenpeace has called for the leaders at G20 to step up their commitment to phase out fossil fuel subsidies by 2020.

“Touting the Paris ‘triumph’ while handing out money to the fossil fuel industry is simply not compatible with the Paris agreement. Governments must keep coal, oil and gas in the ground and urgently focus on a just transition to renewables,” said Greenpeace east Asia’s senior climate policy adviser, Li Shuo.

There have been a number of high-profile investments into Europe by Chinese companies, such as the purchase last year of the Irish aircraft lessor Avolon Holdings in a deal worth €6.5 billion, but there is a growing sense that the traffic is all one way, that western companies are not allowed access to the Chinese market in the same way.

“I hope that China will go beyond symbols and add substance, by making concrete steps on overcapacity, environmental goods agreement etc,” said Jörg Wuttke, president of the European Chamber of Commerce.

The chamber last week released a position paper saying there was a “small, rocky pathway” to China for foreign investors and “an autobahn from China to Europe”.

“Beyond most countries lamenting protectionism, yet raising borders themselves, to me the new concept is reciprocity. This is where you can benchmark and compare,” he said. “I guess they are not ready yet, living in denial that the West shall remain open forever.”

Kerry Brown believes it will be awfully tempting for China to really try to make G20 a big hit event.

“But in fact it would be wiser for them to have something quite routine, business-like, and indicative of a mature, self-confident power. We will know pretty soon which route they have decided to go down,” said Brown.