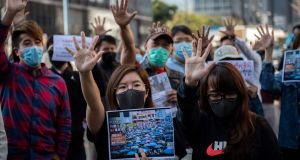 Mr Trump had appeared reluctant to sign the legislation in recent days, suggesting trade negotiations with China were a key priority, but with overwhelming bipartisan support for the Bills lawmakers would have been able to override any veto by the president.

“I signed these Bills out of respect for President Xi, China, and the people of Hong Kong, ” he said. “They are being enacted in the hope that leaders and representatives of China and Hong Kong will be able to amicably settle their differences”.

The law requires the US to annually review Hong Kong’s favourable trading status, with the option to revoke the trading terms if human rights are abused. It also threatens sanctions against individual officials for rights violations, and a supporting law bans the export of crowd-control munitions, such as tear gas, rubber bullets and pepper spray, to the territory.

“The Chinese government and the people firmly oppose such stark hegemonic acts,” a foreign ministry statement said. “We urge the United States not to continue going down the wrong path, or China will take countermeasures and the US must bear all the consequences.”

Hong Kong has been roiled by six months of anti-government protests that were sparked by a now-withdrawn extradition Bill that would have allowed suspects face trial in mainland Chinese courts. The protests quickly ballooned into a wider movement condemning the erosion of freedoms in the financial hub, demanding police accountability and calling for the introduction of meaningful elections.

More than 5,800 protesters have been arrested to date in clashes with police, with the protests at times causing widespread disruption to transport networks, schools and businesses.

Following the passing of the new laws, Beijing slammed Washington for taking the side of the protesters.

“The United States, in disregard of facts and distorting right and wrong, openly supported violent criminals who rampantly smashed facilities, assaulted innocent civilians, trampled on the rule of law and jeopardised social order,” the foreign ministry statement said. “The egregious and malicious nature of its intentions is fully revealed. Its very aim is to undermine Hong Kong’s stability and prosperity.”

On Thursday Hong Kong police entered Polytechnic University, a key battleground that has been under siege for 11 days after protesters barricaded themselves in following violent clashes outside.

Since the siege began about 800 protesters were arrested after giving themselves up to police surrounding the campus, and more than 300 minors had their details taken with officials reserving the right to prosecute them at a later date.

It was unclear whether any protesters remained on the campus as the police entered to remove dangerous items such as petrol bombs and chemicals, and collect evidence. Officials said any protesters found would be first brought for medical attention and arrests were not a priority.

The US legislation is the second major boost for the protest movement this week, with local district council elections on Sunday delivering an unprecedented landslide victory to pro-democracy candidates.