Democratic pressures grow in Zimbabwe with goal of honest poll 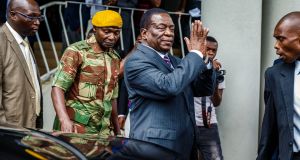 Zimbabwe’s president, Emmerson Mnangagwa: has repeatedly stated he wants to build a new Zimbabwe but much of the oppressive legislation introduced by Mugabe remains. Photograph: Jekesai Njikizana/AFP/Getty

With only months to go to a general election in Zimbabwe that citizens hope will mark the beginning of a new democratic era, social justice activists are gearing up to pressure the ruling party to hold credible polls.

Since Emmerson Mnangagwa replaced the ousted Robert Mugabe in December, the new president has sought to reassure the international community that the coming poll will be “free and fair”.

Legitimacy abroad is essential if Mnangagwa and his Zanu-PF administration are to convince wealthy investors to inject the billions of dollars needed to kick start the local economy, which has been crippled by gross mismanagement.

However, although Mnangagwa has repeatedly stated he wants to build a new Zimbabwe that adheres to the principles of democracy, much of the oppressive legislation introduced by Mugabe remains in place.

Human Rights Watch’s recently released World Report 2018 says the authorities in Zimbabwe have yet to introduce “any meaningful security sector, media, or electoral reforms to ensure that citizens can participate in credible, free, and fair elections”.

Furthermore, many Zimbabweans find it hard to trust the 75-year-old Mnangagwa because he has strong links to the military, and has surrounded himself in government with his former comrades from the war of independence.

Nevertheless, the ruling party’s new fixation with its global image has opened up a space for activists to safely agitate for political reform, according to Dirk Frey (31), a member of the Harare-based social justice movement Occupy Africa Unity Square.

“People are getting more into activism now because we have a bit of room to breathe. The security forces can’t use excessive force against us at the moment so we need to keep the pressure on Zanu-PF to reform,” he says. “We must use their need for legitimacy as leverage to achieve our goals.”

Up to 2015, ordinary Zimbabweans rarely challenged Zanu-PF openly. People relied on political parties and elections to voice their views on how the country was being run.

But in 2016, activism for social justice began to sweep across Zimbabwe in the form of large-scale anti-government protests, demonstrations, petitions, campaigns and marches.

One of the most high-profile activist leaders in this public opposition to Zanu-PF was Harare-based pastor Evan Mawarire, who was a strident Mugabe critic.

In 2016 Mawarire’s #ThisFlag movement organised the biggest protests in a decade against the former dictator over a deteriorating economy, cash shortages and accusations of government corruption.

Frey says in his view the emergence of social justice movements in 2015 was “a response by citizens to the failure of opposition parties to make any headway against the ruling Zanu-PF party”, which has been in power since 1980.

While 2016 was a year of action, 2017 saw activists’ protests peter out dramatically. Some commentators suggested their inexperience in dealing with the ruling regime led them to being outmanoeuvred by it.

There were also allegations of corruption made against some of the movements that received financial assistance from international donors, which sullied their reputations with the public.

Linda Masarira, founder of the Zimbabwe Women in Politics Alliance, says its momentum was slowed by continual harassment from state security agencies. This manifested in the form of ongoing court cases as well as repeated detention and interrogation by the police.

“Many of us had on average five separate cases in the courts in different cities,” says Masarira. “They [the authorities] had us running all over – just cases and charges you cannot attend to. It just drains you. So that alone had a very big impact on us.”

In addition, Frey says activists began to realise that to be more effective, they needed to become better organised. So they started holding consultative meetings to plot a way forward, rather than holding impromptu mass protests.

“We [the different movements] are a lot more connected and organised now and we want to target specific issues. Although our street protest activities are currently at a low level, mass mobilisation is something we can still use to meet our goals,” he said.

In the run-up to the elections, getting ordinary people signed up to the new biometric voter registration (BVR) system, which captures finger prints and facial features, is high on activists’ agendas.

Masarira says colleagues from rural communities are reporting that government officials in some places are using people’s lack of knowledge about the BVR system to intimidate them into voting for Zanu-PF.

“People are being told government will know how they vote under this system. We have reported this to the Zimbabwe Election Commission in the hope it will act. We are also worried the new electronic vote-capturing system could be used to rig the election,” she says.

Many social justice movements are also aligning their support behind independent election candidates who have decided to run for office in the coming election, such is their mistrust of the established political parties, even those in opposition.

To give people an alternative voice in government, Masarira says she has decided to run for parliament as an independent MP for the Harare Central constituency.

“I have to stand because there is a leadership crisis in the opposition parties, and we [the social justice activists] should be at the forefront of rebuilding Zimbabwe,” she concluded.