Nigeria’s floating school has plenty to teach the wider world 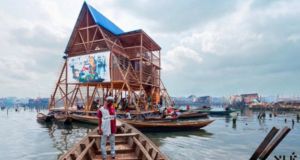 Learning curve: the floating school in Makoko in Lagos has now become a meeting place for the community

The Nigerian architect Kunlé Adeyemi has designed buildings and furniture across the world. After studying architecture at the University of Lagos, where he began his early practice, he joined the Office for Metropolitan Architecture (OMA), in the Netherlands, in 2001.

In the Netherlands he worked closely with OMA’s founder, Rem Koolhaas, being assigned to projects in Europe, Asia, Africa and the Middle East. He then founded NLÉ, an architecture and design company, whose name means “at home” in Yoruba.

Now Adeyemi is pioneering floating buildings to solve the issues of flooding and land occupation that affect hundreds of thousands of people in Nigeria and other African coastal cities, including the 85,000 residents of the Makoko slum in Lagos.

Alongside the houses built on stilts, a school designed by Adeyemi floats on 256 recycled plastic barrels.

Designed with support from the Heinrich Böll Foundation and the United Nations as a pilot project, the three-storey wooden structure accommodates 100 primary-school children at any one time.

Established in the 18th century primarily as a fishing village, Makoko is now Nigeria’s oldest slum. It was not counted as part of the 2007 census; the population today is estimated to be about 100,000. The community has almost no roads, no land and no formal infrastructure to support its day-to-day activities. At least half of the 4,000 structures in the community are on water, supported by stilts.

Although Makoko has some makeshift schools, they cannot cater for the increasing number of children in the area.

The floating school is aimed at generating a sustainable, inexpensive, ecological, alternative building system and urban water culture for the population of Africa’s coastal regions.

“The desire to construct the school was born out of curiosity after I visited the community,” says Adeyemi, “and by my interest in the coastal community, where, despite the little income made daily by the breadwinners, they have never stopped developing the infrastructures in the community.”

Each of the floors in the school has a modern toilet and solar-electricity supply, which can provide lighting in the evening. The ground floor has an open space that serves as a playground.

As the only public space in the area, the school quickly became a community meeting place where, when classes are out, market ladies park their boats and fishermen grab some shade to mend their nets.

When he set about building the school, Adeyemi’s first step was to look around the community for design solutions. Makoko has an “anything that floats” mentality when it comes to building materials, so he decided to buoy the school on floating barrels and local timber.

Unskilled locals were hired to build the structure, with the idea that they could build their own homes with the techniques learned while erecting the school.

The floating structure adapts to the tidal changes and varying water levels of the lagoon, protecting it from floods and storm surges.

The school won the 2013 AR+D award for emerging architecture, was shortlisted for the London Design Museum’s 2014 Design of the Year award and was nominated for the 2015 International Award for Public Art.

Despite those plaudits it has not been plain sailing; the Lagos state government initially resisted recognising the school because the Makoko slum has been tagged as an illegal settlement. This means it had no government financial support. But on April 20th the Lagos state ministry of physical planning and urban development announced it was considering incorporating the school’s structure into a regeneration plan for the entire Makoko community.

“This is a rare and significant moment in history, where innovation is finally matched with an equally open-minded reconsideration of established policies,” Adeyemi says. It “is an important signal for mobilising the local and global interest that is critical for addressing the challenges and opportunities posed by rapid urbanisation and climate change in developing African waterfront cities”.