Lukodi massacre: ‘They should pay us because we lost so many people’ 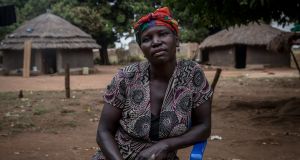 Beatrice Amono (42): Her brother and uncle were killed in the 2004 Lukodi massacre. Photograph: Sally Hayden

Victims of a Ugandan former child soldier turned rebel militia commander who was convicted this week by the International Criminal Court (ICC) are calling for reparations and financial support.

Dominic Ongwen was found guilty of 61 counts of war crimes and crimes against humanity committed in the service of the Lord’s Resistance Army, which waged a campaign of extreme brutality in several African countries from the mid-1980s.

His conviction included charges related to ordering a May 2004 massacre in a displaced persons’ camp in Lukodi, a northern Ugandan village, during which more than 60 people were killed.

Ongwen was abducted by the LRA as a child and his case is the first ICC conviction of someone who was a victim as well as a perpetrator.

Over the six years since Ongwen has spent in ICC detention in The Hague, Lukodi has been a focus of attention. Residents have grown so used to visiting journalists that they keep chairs by the market to seat them on. Some have repeated stories of tragedy countless times.

On Friday, many expressed relief that Ongwen’s trial was finally over.

“The only way to make us feel better is to pay us something,” said Evelyn Akec, a 60 year old whose child was abducted during the village massacre. Her pregnant daughter-in-law was beaten and lost a baby, while Akec’s belongings were burnt and her livestock taken. She was injured in the back.

Money would enable villagers to buy cows and equipment for farming, and pay school fees for Lukodi’s children, she said “We could start our life again.”

“The people of Lukodi want to be paid because they passed through so many problems,” said Charles Okwonga, chairman of a victims’ association. “If Ongwen [was found innocent] that meant there wouldn’t be any payment. That’s the message we got from the ICC.”

Okwonga said his brothers, mother, and sister-in-law died in the massacre. He would like to see Ongwen apologise. “If he asks for forgiveness . . . maybe he should be given amnesty and allowed to come back to live with the people.”

More than 100 orphans in Lukodi needed support, he said, adding that older victims died waiting for the verdict, some from stress-related conditions. “People were suspecting [that] after the ruling maybe they would get paid, they kept wondering when are they going to pay us,” he said.

Few northern Ugandans escaped the war unscathed. Between the late 1980s and mid-2000s, tens of thousands of children were abducted, nearly two million displaced and as many as 500,000 killed during fighting between the rebel Lord’s Resistance Army group and Uganda’s security forces. Both sides were accused of war crimes and crimes against humanity.

In the years since, there has been no compensation for victims, who live in one of the more impoverished parts of one of the world’s poorest countries. While the area is now peaceful, millions struggle to survive.

Victims are quick to point to the high levels of expenditure arising from other aspects of the conflict. Between 2011 and 2017, the US spent $800 million around 650 million eurohunting for LRA leader Joseph Kony.

Ugandans joke about how much weight Ongwen has gained since his trial began, a sign of how well he is eating. In 2016, Lino Owor Ogora of the International Justice Monitor, an independent watchdog, described the Ongwen case as the “first real opportunity that victims in Uganda will have had to benefit from a formal reparations scheme, but only in the event that Ongwen is found guilty”.

Ogora said a scheme could take years to develop after the verdict, or not happen at all.

More than 4,000 victims were recognised as “participants” in Ongwen’s trial. “I feel like they should pay us because we lost so many people,” said Beatrice Amono (42), whose uncle and brother were killed in the Lukodi massacre. “[So far] we got no benefit from the ICC and no benefit from the government. If the ICC can pay they should . . . Now that Ongwen is in prison, he can’t.”

Listening to the judge call out the names of victims on Thursday was very upsetting for her, and it had taken “patience” to get through the trial.

Some survivors felt like they were retraumatised over the six years since Ongwen was transferred to The Hague, while there was infighting among victims’ groups and a lot of dashed expectations.