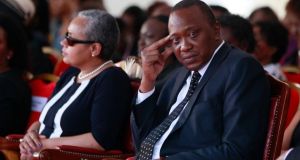 
A special African Union summit this month could lead to a breakdown in relations with the International Criminal Court, amid claims that the trials of the Kenyan president and his deputy in The Hague are fresh proof that the court is “hunting” African leaders.

Tensions between the African Union (AU) and the court (ICC) are nothing new, but the meeting in Addis Ababa, the Ethiopean capital, has the potential to irretrievably damage relations between them.

Kenya’s parliament voted on September 5th to leave the ICC, and it will be lobbying at the 54-country summit for a mass withdrawal by the 34 remaining AU members, or alternatively for a two-thirds majority instructing those countries to end their co-operation with the court.

“The Kenyans were criss-crossing Africa in search of support for their cause even before their parliament voted to withdraw from the ICC,” said one AU diplomat. “A complete walkout by signatories is certainly a possibility – but other requests are also possible.”

Among those other possibilities is a repeat of the AU request to have the trials of Kenyan deputy president William Ruto and of President Uhuru Kenyattaif not stopped then at least moved to Nairobi.

Both men have been seen as stalwarts in the fight against Islamic extremism following the Westgate killings, and have argued that their absence for months on end, particularly in the case of Mr Kenyatta, is not just dangerous but also untenable.

Despite denials by the ICC that it disproportionately targets African leaders for prosecution, and its insistence that it stands up for victims wherever it finds them, it is not just Kenya that is promoting the anti-ICC agenda and pointing out that all eight cases it is investigating are in Africa.

Sudanese president Omar al-Bashir, wanted for genocide and crimes against humanity in Darfur, visited Kenya last month but was not arrested, despite an ICC request. He says the charges are “exaggerated” and describes the ICC as part of a “western plot” against him.

Last week, Ivory Coast’s government decided not to transfer former first lady Simone Gbagbo to join her husband in The Hague on charges of crimes against humanity in connection with the 2010 presidential election, and said it would try her at home.

Rwanda’s ambassador to the African Union, Joseph Nsengimana, observed: “It is not only the case of Kenya. We have seen international justice become more and more a political matter.”

Ethiopian prime minister Hailemariam Desalegn, the AU chairman, told the UN General Assembly last week: “The manner in which the ICC has been operating has left a very bad impression in Africa. It is totally unacceptable.”

South African president Jacob Zuma said it was the impression that the ICC was being “unreasonable” – that led directly to the Addis Ababa summit on October 13th.

There is just one item on the summit agenda: “Africa’s relationship with the ICC”. Countries that support the court and its work, notably Botswana, are likely to do so again. Those who oppose it are hoping it will be “a game-changer”, most immediately perhaps in the case against Mr Kenyatta.

1 Mandatory quarantine and flight cancellations unlikely despite rise in cases
2 Two in custody after Ryanair flight to Dublin forced to divert
3 California shuts down again as US coronavirus cases surge
4 US passengers fly into Dublin: ‘I’m here for six days. I guess I’ll have to stay inside’
5 Cowen under pressure to answer further questions on gardaí encounter
Real news has value SUBSCRIBE