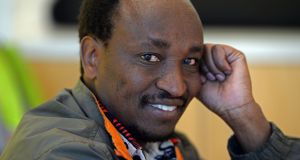 The young car-washers of the Mathare slums become acquainted with police brutality at an early age.

In Nairobi, washing vehicles at traffic lights is one of the few ways poor young people make money. But the authorities consider them a nuisance, as they “tap” illegal water connections and are often involved in petty criminality.

Consequently, they tend to find themselves on the receiving end of beatings and shakedowns by a police force with a reputation for violence.

Human rights activist Gacheke Gachihi started washing cars in his early teens after he was displaced from the Rift Valley amid post-election violence in 1992. For him, the youngsters’ travails in Mathare are symptomatic of a wider problem around corruption and accountability in Kenya.

Now 37, Gachihi was in Dublin this month to meet officials from the Department of Foreign Affairs to raise concerns about police brutality, extrajudicial killings and a culture of official impunity in Kenya.

Although these issues have been documented for some time, Gachihi says the situation has deteriorated since the election of Uhuru Kenyatta in 2013.

“Ten years ago, under the [Mwai] Kibaki government, you had the right to assemble, to demonstrate, you could criticise the president,” he says. “Now it’s becoming difficult.”

According to the Human Rights Watch organisation, Kenya has tried to restrict civil society and independent media while the government has also been slow to implement reforms seen as “crucial to addressing the country’s political crisis”.

A co-founder of Bunge La Mwananchi (People’s Parliament), Gachihi has been involved in community-level projects for 15 years – his interest initially roused by his experiences on the streets of Mathare when “the police would arrest us, take money from us . . . and beat us”.

One recent project involves setting up community centres to inform residents of Mathare about their rights. Mathare covers about 5sq km and is a collection of some of Nairobi’s poorest slums. As with many informal settlements in the city, it is dogged by land -grabbing developers and forced evictions. Gachihi organises workshops and demonstrations but this sort of activity carries risks.

“Government supporters can send messages to your family, telling them, ‘We’ll come for you, we know where you are’. They send threatening messages through SMS or pass messages around your neighbourhood saying, ‘We’ll deal with you, we know what you are doing’. Sometimes they are very threatening. And sometimes you feel you need to step back because it touches people closest to you. It’s very difficult.”

In 2007, the Kenyan National Commission on Human Rights documented about 500 killings or disappearances in a five-month period. A 2009 report from the UN special rapporteur on extrajudicial killings highlighted “a climate of impunity” in which police frequently execute individuals.

State intimidation was highlighted on April 5th with the collapse of the International Criminal Court trial against Kenyan deputy president William Ruto, accused of murder, deportation and persecution after the 2007 general election. One judge cited a “troubling incidence of witness interference and intolerable political meddling”. Two years earlier the prosecutor dropped similar charges against Kenyatta amid allegations of witness intimidation.

For Gachihi, intimidation, corruption and unaccountability blight east Africa, not just Kenya. “The region is experiencing a bad rise in a culture of people who don’t want to leave power. So the culture of impunity and dictatorship is being shared. Whatever Uganda is doing, if it is passing a Bill against non-government organisations or a Bill against a sexual minority, you find it is being discussed in parliament in Kenya.”

It is as if Yoweri Museveni, Uganda’s tenacious president of 30 years, has become their mentor, says Gachihi.

“We don’t have a voice of reason – except maybe Tanzania – that’s why we have a crisis in Burundi and nobody can solve it. Regionally we don’t have credible leadership that can stand for democracy, accountability, human rights.”

International tours, such as the one Gachici is on, help to raise these issues, making it more difficult for Kenya to persecute human rights activists.

“It tells the powers that be that this struggle is not local,” says Gachici. “It is global. A human rights activist in Kenya is seen as a dissident, a troublesome person, someone with no fixed abode, unemployable. So this kind of opportunity humanises us. It restores the dignity to us and it gives us hope to continue struggling.”

A response to Gachihi’s allegations from the Kenyan embassy in Dublin was awaited.