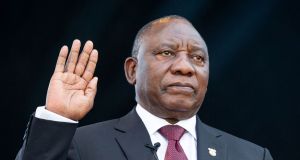 Cyril Ramaphosa raises his right hand as he takes the oath of office at his inauguration as South African president, in Pretoria. Photograph: Yeshiel Panchia/AFP/Getty Images

Cyril Ramaphosa has been sworn in for a five-year term as South Africa’s president.

He took the oath of office on Saturday in front of some 30,000 people at a stadium in Pretoria.

Mr Ramaphosa urged South Africans to pursue “an extraordinary feat of human endeavour” as he was sworn in.

He said: “The challenges our country faces are huge and real. But they are not insurmountable. They can be solved. And I stand here today saying they are going to be solved.”

It was the party’s weakest election showing since the ANC took power at the end of apartheid in 1994.

Mr Ramaphosa has apologised to South Africans and vowed to continue the fight against the government corruption that has damaged the economy, the most developed in sub-Saharan Africa. – AP