Calls for Libyan shooting to be investigated as ‘war crime’

Footage taken inside the Qasr bin Ghasir migrants’ and refugees’ detention centre near Tripoli, Libya captures an attack on it by fighters from Libya’s self-styled Libyan National Army. 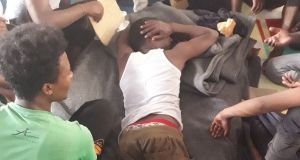 The aftermath of an attack on the Qasr bin Ghashir detention centre near Tripoli on Tuesday.

Refugees and migrants were praying inside a detention centre in south Tripoli this week when fighters aligned with Libya’s eastern forces opened fire, killing several people and injuring about 20, according to witnesses.

The attack on Tuesday, which human rights groups say may constitute a war crime, took place after more than 700 men, women and children had spent weeks in the middle of clashes between forces aligned with the self-styled Libyan National Army, led by renegade general Khalifa Haftar and the UN-backed government in Tripoli.

“We are shocked ... some people were screaming. We have lost a brother and friends,” said a Sudanese man in his 20s, who was present during the attack.

According to UN figures there are about 6,000 refugees and migrants being held in official Libyan detention centres, most of whom escaped war or dictatorships in Africa and the Middle East, and were trying to reach security in Europe.

Five detainees have spoken to The Irish Times about what happened on Tuesday afternoon at the Qasr bin Ghashir centre, 25km south of Tripoli. They have been interviewed by phone, as well as through audio recordings and messages on WhatsApp and Facebook. Many of them had been in touch with The Irish Times for months before this incident.

Though the death toll is uncertain, three detainees say at least three people died from their injuries.

On Wednesday, Amnesty International called for the attack to be investigated. “A violent attack by fighters who opened fire on refugees and migrants at a detention centre on the outskirts of Tripoli highlights the urgent need to ensure civilians are protected and perpetrators are held to account,” the human rights organisation said in a statement.

“Deliberately firing on detained civilians, including migrants and refugees, would be a war crime,” Gerry Simpson, associate director for the conflict and crisis division at Human Rights Watch, told The Irish Times. “Indiscriminately firing on a detention centre known to contain fighters and civilians breaches the laws of war.”

Witnesses said fighters wearing uniforms, which showed they were aligned with the Libyan National Army, drove up to the Qasr bin Ghashir centre, which is run by a militia aligned to the LNA.

An Eritrean man, who was present, said many of the 728 detainees were praying. He said the attackers told the detainees to stop praying, but many people didn’t hear them. “After a few minutes [they] started shooting.”

“They came without any reason. They came to get inside,” he said.

A detainee from Darfur, Sudan, said he thought fighters were still inside a vehicle when they began to shoot, and he saw a lot of people falling down. He said the attackers then entered the centre “and began to stab people with a knife”.

An attempt to move refugees and migrants in Qasr bin Ghashir to a detention centre in Zintan, 170km southwest of Tripoli, failed on April 11th. Detainees told Libyan authorities they would rather die during fighting than lose access to international organisations who might protect them, and said there was a high death rate among detainees in Zintan, because of a lack of medical care and poor conditions.

The United Nations Refugee Agency (UNHCR) confirmed the shooting in Qasr bin Ghashir, about 25km south of Tripoli, though a representative said they weren’t aware of any deaths. The Irish Times could not confirm the deaths with any other organisation, many of which are reluctant to speak publicly for fear of repercussions.

In a statement, the UNHCR said gunshots were fired only in the air, and there were “no bullet wounds”, though it said “12 refugees endured physical attacks that required hospital treatment”.

All detainees who spoke to The Irish Times said this was untrue, and that people were hit by bullets. “That is false news,” said one man. “All are shot by bullets.”

“Two people dead immediately,” said an Eritrean refugee in the detention centre. He said an ambulance had arrived after some time to take the most seriously injured people, and the bodies of those who had died. However, others were left without medical care, he said.

“There [are] injured people until now. The ambulance did not return back. All of them have [a] dangerous injury [on] their leg,” he said.

Their account is supported by the aid agency Médecins Sans Frontières, which said in a statement that an analysis of photographic and video evidence by MSF doctors concluded that the injuries shown were consistent with gunshot wounds.

MSF’s head of emergencies renewed a plea for the “urgent and immediate evacuation” of all migrants and refugees out of Libya.

Several witnesses in Qasr bin Ghashir, all of whom asked not to be named for their own safety, sent videos recorded during and after the attack. In one, what sounds like gunfire can be heard outside the centre, as refugees and migrants inside shout. In another, a large amount of blood is visible on the floor, as refugees and migrants dress the wounds of those injured.

Detainees in Qasr bin Ghashir were trapped in clashes several months ago. At the time, multiple sources said guards at the centre forced dozens of Sudanese detainees to leave and assist fighters with moving and loading weapons.

Many of the people present on Tuesday have tried to escape Libya in the past two years by crossing the Mediterranean Sea, but were forcibly returned by the Libyan coastguard. The EU is spending tens of millions of euro to support the coastguard and stop migrants and refugees reaching Europe, even though those returned to Libya are put into indefinite detention.

“Alleged violations of human rights and violence against civilians, including refugees and migrants, are completely unacceptable and must be denounced in the strongest terms,” an EU spokesman told The Irish Times by email, when asked about the shooting at Qasr bin Ghashir.

More than 2,700 refugees and migrants in Tripoli are being held in areas surrounded by fighting, according to the UNHCR.

“It is a race against time to move people out of harm’s way. Conflict and deteriorating security conditions hamper how much we can do,” said Lucie Gagne, the UNHCR’s assistant chief of mission in Libya, last week.

“We urgently need solutions for people trapped ... including humanitarian evacuations to transfer those most vulnerable out of the country.”

On Wednesday and Thursday, the UNHCR transferred the remaining detainees in Qasr bin Ghashir to another detention centre in Zawiya, 52km northwest of where they had been, on the coast. Some detainees escaped to avoid going to the new centre, while others who were transferred there messaged The Irish Times to say they had been immediately threatened on arrival by the centre’s guards, who fired shots in front of them, and told them the only way they’ll get away is to pay money to cross the sea.

Many of the migrant detention centres in Libya are very close to military bases, and detainees are worried they’ll be targeted or injured as a result.

“Behind our centre there is a vast area with no building. That is their military camp,” said one Eritrean detainee, who is in a detention centre further north in Tripoli. “We can’t even rest with the noise of heavy weapons.”