Divided Spain goes to the polls 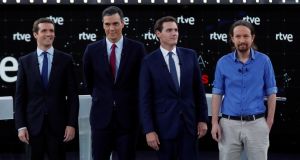 In Madrid’s Plaza de Colón, the largest Spanish flag in the country hangs from a 50m-high mast and opposite stands a symbol of Spain’s Golden Age: a statue of the explorer Christopher Columbus.

Both have been here for some years, but more recently other reminders of Spanish identity have started to appear: smaller national flags hanging from apartment windows and balconies nearby. Many of the cars that stop at traffic lights even bear miniature versions of the red-and-yellow national colours hanging from their rear-view mirrors.

This recent and very sudden resurgence of Spanish national pride, which is visible in towns and cities across the country, has been approvingly labelled “the Spain of the balconies” by the leader of the conservative Popular Party (PP), Pablo Casado. In February, he led a demonstration by the political right in the Plaza de Colón against the Socialist government of Pedro Sánchez.

On the campaign trail, Casado has accused the Socialist leader of being a 'Trojan horse'

The “Spain of the balconies” has informed this Sunday’s deeply polarised general election, which both the left and right have described as the most important of modern times. Casado, for example, warned that the vote “could change the history of our country – Spain could stop being a united nation”.

Sánchez saw very different reasons for its significance. Invoking the February protest against his government, the prime minister said the election is a choice between “progress or the backwardness of [Plaza de] Colón”.

The main cause of this polarisation is Catalonia.

In October 2017, the northeastern region’s government attempted to break away from Spain, holding a chaotic referendum which was followed by a declaration of independence by the Catalan parliament. However, the bid failed as Madrid introduced direct rule, the then-Catalan president Carles Puigdemont and several colleagues fled abroad and others were jailed. The current Catalan president, Quim Torra, has continued to campaign for independence, albeit without a clearly defined strategy.

“The Catalan issue activated something in the Spanish psyche in terms of defining who we are,” says José Fernandez Albertos, a political scientist at the National Research Council (CSIC).

“When Catalan nationalism pressed for independence and sought to show how different and distant they were from Spain, it was something that spurred this Spanish nationalism – the flags on balconies and so on.”

The favourite to win the election is Sánchez’s Socialist Party, which has been governing for the last 10 months and riding high in polls. He took office after launching a no-confidence motion against the corruption-plagued conservative incumbent, Mariano Rajoy, last May. But the fact that Sánchez’s parliamentary ambush required the support of Catalan and Basque nationalists has been used by the right against him ever since.

On the campaign trail, Casado has accused the Socialist leader of being a “Trojan horse” who is smuggling Catalan and Basque nationalists into the heart of Spanish democracy before letting them break up the nation with their separatist agenda. Ciudadanos and the radical Vox, the other parties on the right, have expressed similar views.

“[Sánchez] has his platform, which is him and those who want to liquidate Spain,” Ciudadanos leader Albert Rivera said recently.

All three parties on the right promise a hard-line unionist stance on the Catalan issue, with policies that include reintroducing direct rule indefinitely and shutting down the region’s public broadcaster.The ongoing trial of 12 Catalan independence leaders in the supreme court for their role in the events of 2017 has served to raise tensions further.

The parties on the right have claimed that Sánchez plans to pardon the accused if they are found guilty. Although the Socialists have taken a more moderate stance on the Catalan issue, engaging with the Catalan government, the prime minister insists he cannot even broach the matter of pardons before the supreme court verdict, which is expected after the summer.

With a highly fragmented political landscape, the Socialists are unlikely to secure a majority on Sunday. Once again, they might only be able to govern with the support of their closest ally Podemos, which has been struggling in polls, and Catalan and Basque nationalists.

The most likely alternative to such a scenario would be a right-wing administration of the PP and Ciudadanos, with the support of Vox. That formula managed to end 37 years of Socialist government in Andalucía in December, although polls suggest the numbers are unlikely to add up on a national level.

The left has used Vox’s surge of recent months to mobilise its own base, warning of the rise of the far-right and populism around the world.

“Look what happened in the United States, nobody gave Donald Trump a chance and he won,” Sánchez told supporters this week. “Look at Brazil: [Jair] Bolsonaro is governing. In Andalucía nobody thought [the PP] would govern and there it is with Vox.”

He added: “It’s not enough just to win, we need to win and govern.”

If neither left nor right can form a government, Spain could find itself facing the kind of political paralysis that followed the 2015 election, when several months of deadlock were followed by a repeat vote. Ciudadanos has apparently ruled out bridging the left/right divide, vowing not to support a new Socialist administration.

However, given that this is the country’s third general election in less than four years and that EU and local elections will be held in May, the pressure on political leaders to reach a consensus will be substantial.

The stakes are arguably higher than any time since Spain’s transition from dictatorship to democracy four decades ago. Not only could this election decide the country’s economic and social policies for the coming years, but, taking place against the backdrop of “the Spain of the balconies”, it also offers two starkly contrasting approaches to the Catalan conundrum.