No claim of responsibility for incident and kidnappers yet to be identified, police say 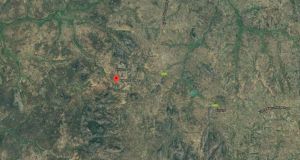 The woman, named as Faye Mooney, was a recreational resort called Kajuru Castle when she was killed. Photograph: Google maps

Kidnappers in Nigeria killed a British woman and a Nigerian man, and abducted three others in the northern city of Kaduna, local police and the British High Commission said on Sunday.

Kidnappings are rampant in Nigeria, where both locals and foreigners are targeted, mostly for ransom.

The woman travelled from Lagos as a tourist and was attending a party before the incident happened, police said.

The British High Commission named the woman as Faye Mooney and said it was aware of the incident that happened late on Friday but added it would not speculate on the motive or nature of attack.

There has been no claim of responsibility for the incident and the kidnappers have yet to be identified, police said.

We are aware of the tragic incident involving the death of a British national in Kaduna State on Friday. The next-of-kin has been notified. The British High Commission offers our most profound sympathies and condolences to the families and friends at this difficult time.

Mooney was employed in Nigeria by a non-governmental organisation called Mercy Corps. Her next of kin have been notified, the British High Commission said.

The police did not name the other person killed.

Northern Nigeria is plagued by a Boko Haram and Islamic State insurgency as well as clashes between farmers and herders in which hundreds have died.

“We are engaging with the Nigerian authorities, and we understand an investigation is underway,” the British High Commission said in a statement.

In 2014, more than 270 schoolgirls were abducted from the town of Chibok propelling the Boko Haram insurgency into the spotlight, prompting the global #BringBackOurGirls campaign. Some of the girls remain in captivity five year later. – Reuters