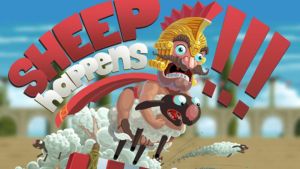 One of the more bizarre runner games, Sheep Happens takes some Greek myths and legends and mixes them with random sheep and a lot of humour. You take on the role of Perseus, who is on the trail of Hermes in a pair of winged sandals that just won’t stop running. To catch him, you have to run through a stadium filled with athletes taking part in various events. Weightlifting sheep. Tug of war sheep. Hurdles, with the odd sheep running the track beside you. You get the idea; sheep are everywhere. There is some help. You have a cape that allows you to glide over some of the more difficult hurdles. And should you cause a sheep-filled chain reaction, the animals raining down will helpfully take out fellow athletes, hurdles and other obstacles, while also earning you a nice combo score. There are battles with Olympic gods too, in this chaotic, funny take on the traditional runner.
sheephappens.net