Pope Francis calls for a compassionate Church open to "imperfect" Catholics in his much-awaited document on family and marriage, a 260-page treatise called "Amoris Laetitia," (The Joy of Love). Video: Reuters 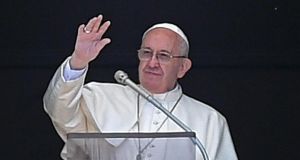 “Doctrinally it is as anticipated, very traditional. The openness to ongoing debate is welcome as is the encouragement of the initiative of local churches,” she said.

But she said that “pastorally it lacks the imagination and innovation that had been hoped for”.

She was “disappointed in the document’s overall failure to clearly address many of the challenges facing families within the church today”.

The We Are Church Ireland group also expressed disappointment at the document.

While welcoming “its pastoral outlook and its emphasis on the ‘logic of mercy’”, the group said “there are no positive changes for the many divorced and civilly remarried Catholics who are in a second relationship”.

In it, Pope Francis “states very clearly”, the group noted, that “it can no longer be said that all those in any irregular union are living in a state of mortal sin and are deprived of sanctifying grace”.

It said “the implication of this statement means that people in second relationships can now receive Communion as they are not in a state of mortal sin which in traditional theology was the only barrier to receiving the Eucharist”.

It also noted how Pope Francis had called in the document “for divorced and civilly remarried Catholics to be more fully integrated in to the Christian community” and how throughout the document he emphasised “the importance and the role of individual conscience”.

The one area where Pope Francis had failed in the document was to do with LGBT people, it said.

Describing Amoris Laetitia as “this challenging and at times poetic document”, it said it was “riddled with an incomplete and painful understanding of feminism, reproductive health, gender and sexual identity”.

The group was encouraged by the document’s “strong condemnation of violence and discrimination against women”.

But while Pope Francis wrote “that he ‘values feminism’, he fails to include the modern sexism upheld by the church’s hierarchy as part of the patriarchal cultures that considered women inferior ”.