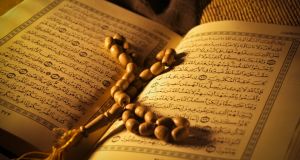 The Irish Muslim Peace & Integration Council will hold its second annual community Iftar in the Al-Mustafa Islamic Centre at Blanchardstown in west Dublin on Saturday next to which members of the LGBT community are invited. Photograph: Getty Images

Members of Ireland’s gay community have been invited to take part in a Muslim community meal in Dublin next weekend as Ramadan comes to a conclusion.

Ramadan is the annual month on the Islamic lunar calendar during which Muslims abstain from food, drink and sex between dawn and sunset. Its end is marked by the feast of Eid-ul-Fitr, or feast of fast-breaking, which takes place on Tuesday next, July 5th.

The Irish Muslim Peace & Integration Council will hold its second annual community Iftar in the Al-Mustafa Islamic Centre at Blanchardstown in west Dublin on Saturday next to which members of the LGBT community are invited. Iftar is the evening meal when Muslims end their daily Ramadan fast at sunset.

“As more than one billion Muslims worldwide celebrate Ramadan by fasting and appreciating the blessings given to us, it is important for the Irish Muslim community to reach out to our neighbours as an example of true Islamic ideals,” said Shaykh Dr Umar Al-Qadri, chairman of Irish Muslim Peace & Integration Council and imam of the Al-Mustafa Islamic Centre mosque.

Meanwhile, Pope Francis has underlined the view of a member of his Council of Cardinals that the Catholic Church should apologise to gay people.

In Dublin last Thursday, responding to a question from The Irish Times, Cardinal Reinhard Marx, Archbishop of Munich and Freising, said: “The history of homosexuals in our societies is very bad because we’ve done a lot to marginalise [them].” As church and society “we’ve also to say ‘sorry, sorry’ ”.

Until “very recently”, the church, but also society at large, had been “very negative about gay people . . . it was the whole society. It was a scandal and terrible,” he said.

Speaking on the flight back to Rome after his visit to Armenia, Pope Francis continued: “I will repeat the same thing I said on the first trip”, referring to the press conference he held on a return flight from Rio de Janeiro, Brazil, in 2013.

“I will also repeat what the Catechism of the Catholic Church says: that [gay people] should not be discriminated against, that they have to be respected, pastorally accompanied.”

According to the National Catholic Reporter, he asked: “Who are we to judge them?” reframing his much quoted 2013 phrase on the same subject into the plural. “We must accompany well – what the Catechism says. The Catechism is clear.”

He recalled how many years ago Argentina was a “closed Catholic culture” where it was looked down on to even enter the home of a couple who had been married civilly after one of the partners had previously divorced.

“The culture has changed – and thank God!” he exclaimed. “Christians, we must say we are sorry many times; not only on this.” It was “the life of the church.We are all saints because we all have the Holy Spirit inside us. But we are also all sinners,” he said.