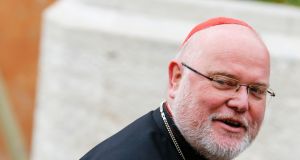 Cardinal Reinhard Marx: told a conference held in Trinity College that until “very recently”, the church and society at large had been “very negative about gay people . . . It was the whole society. It was a scandal and terrible.” Photograph: Stefano Rellandini

A leading cardinal has said the Catholic Church should apologise to the gay community for its scandalous and terrible treatment of them, which had not changed until “very recently”.

Speaking in Dublin, Cardinal Reinhard Marx said: “The history of homosexuals in our societies is very bad because we’ve done a lot to marginalise [them].”

As church and society “we’ve also to say ‘sorry, sorry’ ”.

The German cardinal is a member of the council of nine cardinals chosen by Pope Francis to advise him.

Until “very recently”, the church, but also society at large, had been “very negative about gay people . . . it was the whole society. It was a scandal and terrible,” he told The Irish Times after speaking at a conference held in Trinity College.

He said he had “shocked” people at the October 2014 extraordinary synod of bishops in Rome when he asked how it was possible to dismiss as worthless a same-sex relationship of years duration where both men had been faithful.

“We have to respect the decisions of people. We have to respect also, as I said in the first synod on the family, some were shocked but I think it’s normal, you cannot say that a relationship between a man and a man and they are faithful [that] that is nothing, that has no worth,” he said.

Archbishop of Munich and Freising, Cardinal Marx would not be drawn when asked by The Irish Times for his view on Vatican secretary of state Cardinal Parolin’s description of the marriage equality referendum result in Ireland last year as “a defeat for humanity”.

He spoke to the media in Trinity College Dublin after addressing a conference organised by Trinity’s Loyola Institute on The Role of Church in a Pluralist Society: Good Riddance or Good Influence?

It is up to the state “to make regulations for homosexuals so they have equal rights or nearly equal . . . but marriage is another point”, he said. The secular state “has to regulate these partnerships and to bring them into a just position and we as church cannot be against it”.

But “in all the history of mankind that [marriage] was the relationship between one man and woman, two who are open to give life for the next generation and that is a special relationship I think.”

The state “must be secular. The state is not a Christian state. But the society is not secular. Society is Christian or religious, non-religious, multireligious, whatever,” he said.