Martin tells abuse survivor ‘you’ve touched our hearts, and our hearts are wobbly’ 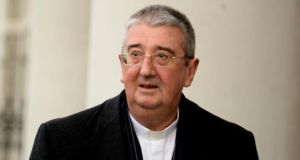 The culture of child protection is not evenly embedded across the Catholic Church and remains a cause for concern, Archbishop of Dublin Diarmuid Martin has said.

“Anybody who weakens a one-church position weakens me. It weakens every other person in the church. We had [child protection] norms since the 1990s and you have audits which show that people weren’t actually really serious about them,” he said.

He was speaking on Friday in Clonliffe College at the annual update of child safeguarding statistics for Dublin. There were allegations against five more priests in the past year but there is a continuing decline in such allegations on a year on year basis. Of those priests, three are deceased and two are retired.

Warning against complacency, Archbishop Martin said “for many years Church leaders thought they knew how best to deal with child abuse by clergy and they had locked themselves into complacency; it took years then to get norms in place.”

He continued: “it took years even to get the information that was in our files into shape; it took years to put into place the action which we knew was necessary; it took years to learn that survivors were not people out to challenge the Church; survivors and their families had simply got things right.”

But there had been “remarkable changes”.

“Who would have thought just a few years ago that in a major radio interview, Marie Collins would be the one challenging Church authorities as one representing the position of the Pope,” he asked.

He was referring to the RTÉ radio interview with abuse survivor Marie Collins on Thursday. She is a member of the Vatican’s Commision for the Protection of Minors which recommended to Pope Francis the setting up of a new tribunal to hold bishops to account, as announced by the Vatican on Wednesday.

The new tribunal will “have to apply the normal principles of justice. If what happened was a breach of the law and a breach of the responsibility of a bishop, they (tribunal) should feel free to investigate it,” he said. Canon law, he said was “very versatile, because it takes in things like natural justice and other principles. So we’ll have to look at that.”

Among living Irish bishops who have faced serious criticisms over their handling of clerical child sex abuse allegations are Cardinals Desmond Connell and Seán Brady, as well as Bishop Brendan Comiskey.

Bishops Donal Murray and Jim Moriarty resigned following publication of the Murphy report in 2009, while Dublin Auxiliary Bishops Eamon Walsh and Ray Field submitted their resignations to Rome but these were not accepted.

Archbishop Martin first became emotional in delivering his address at the launch of updated statistics. It followed an account by clerical abuse survivor Bríd Caffrey of her journey to spiritual peace.

He began his address, saying “Bríd, you’ve touched our hearts, and our hearts are wobbly.” Commenting afterwards about her, he said, “it just reminds you of so many stories you’ve heard and she put it extraordinarily well. She’s a very sensitive woman. I’ve met her before.”

1 Six weeks of Level 5: Non-essential shops to close, no visitors to homes and a 5km travel limit
2 Life under Level 5: What will the next six weeks look like for the State?
3 Covid-19: State moves to Level 5 for six weeks with hopes of ‘meaningful’ Christmas celebrations
4 Coronavirus: Why Level 3 failed and why Level 5 might too
5 Suzanne Lynch’s US Election Diary: Trump suffers debate blow amid trailing polls
Real news has value SUBSCRIBE