Quarter of Irish women have been victims of violence 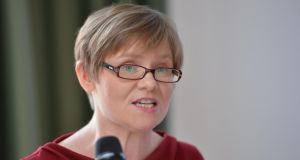 Director of the National Women’s Council of Ireland, Orla O’Connor, who was at the launch of the report by the European Union Agency for Fundamental Rights in Dublin today. Photograph: Alan Betson/ The Irish Times

Irish women’s freedom of movement, as well as their full participation in social, economic and political life is being affected by their fear of assault and violence, advocates said today.

Several agencies held a seminar in Dublin to mark the publication of Europe’s biggest ever survey on violence against women. Figures emerging from the report were described as “shocking”, with such violence “pervasive and pandemic” across Europe.

The study by the European Union Agency for Fundamental Rights (FRA) was based on face-to-face interviews with 42,000 women in all 28 EU member states. On average, 1,500 women in each member state were interviewed.

The survey suggested 26 per cent of Irish women (394,325 women in 2012) had experienced physical and/or sexual violence by a partner or non-partner since the age of 15.

Almost one in three Irish women (31 per cent or 470,157 women) had experienced some form of psychological violence by a partner.

Some 57 per cent of Irish women compared to 39 per cent in Europe said they had reasons for not contacting the police following the most serious incidence of violence. This included that they dealt with the issue themselves or involved a friend, or felt it was a “family matter”.

Some 70 per cent did not contact any service or organisation following the most serious incident of violence, according to the report.

It also found some 52 per cent of Irish women said they avoided certain streets or areas for fear of being assaulted. This compared with 37 per cent of women in the other countries surveyed.

Sharon O’Halloran, director of Safe Ireland, the national organisation of domestic violence services, said the survey confirmed we were “dealing with the tip of the iceberg” in Ireland.

She called on the Government to establish a high-level Cabinet sub-committee to address the “prevalence, complexity and poor response” to all forms of violence against women in Ireland.

Safe Ireland noted that while Irish prevalence figures were high, they were often below other European countries and European averages.

But it said organisations working with survivors of violence should see this as a “wake-up call” rather than any comfort, because it actually highlighted a lower level of disclosure by Irish women.

Outlining the findings in relation to sexual violence against women, director of the Rape Crisis Network Ireland, Fiona Neary, noted funding for rape crisis frontline services had been cut by 16.5 per cent since 2009, with further cuts confirmed for 2014.

“These cuts were to a sector that was already chronically under resourced and have been so unevenly distributed that in fact the centre with the lowest funding was cut by over 30 per cent,” she said.

Caitríona Gleeson of Safe Ireland said that “for thousands of women and children living with the terror of violence in their homes, recession and austerity has not just been tough, it has been catastrophic”.

Where a woman had been brave enough to escape violence and seek support, “the least she should be able to expect is that the supports she needs are there for her – no questions asked”.

“The reality is far from this. In 2014, when many women do manage to make contact with the supports they need to escape violence, they have more often than not come in contact with a system that offers more restrictions than options, more closed doors than open ones.”

Women were doing battle with bureaucracy and facing difficulties with housing policies, for example. This meant they were often forced to return to unsafe homes and face “lifetimes of abusive relationships”.

“This is a dismal record. It’s one that we shouldn’t be standing proud of.”

Director of the National Women’s Council of Ireland, Orla O’Connor, said she had found the results of the survey “absolutely shocking” and in some areas “horrific”.

“Violence against women is a violation of women’s human rights – in terms of respect to dignity, equality and access to justice.”

She said that as the authors had stated, violence against women in all its forms “impacts on all women and stretches beyond the women who are the victims to family and friends and society as a whole”.

“ It absolutely has a devastating impact on women’s physical and mental health and it’s an obstacle to women participating fully in economic, social, political and cultural life. We believe it’s both a cause and a consequence of women’s inequality.”

The advocacy groups called on the Government to sign and ratify the Council of Europe convention on preventing and combating violence against women (the Istanbul Convention).

They also said barriers in relation to housing for women and children needed to be tackled so that women did not end up returning to lifetimes of abuse in the home. They sought an increase of 10 per cent in capital funding for refuges over the next 12 months.