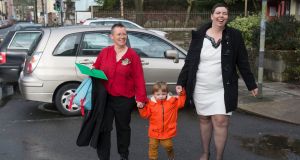 Dolores Murphy and Mabel Stoop Murphy arrive with their son James at the Registry Office in Cork where their same sex marriage was refused due to a technicality. Photograph: Michael Mac Sweeney/Provision 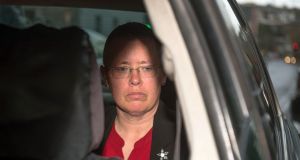 Dolores Murphy leaves the Registry Office in Cork after her same sex marriage to Mabel Stoop Murphy was refused due to a technicality. Photograph: Michael Mac Sweeney/Provision

A same sex couple were left devastated after their marriage ceremony was called off due to a last-minute legal hitch.

Dolores Murphy from Pouladuff Road in Cork and South African native Mabel Stoop Murphy were due to tie the knot at the Cork Registry Office shortly before lunchtime on Tuesday.

The pair dissolved their civil partnership on Tuesday morning and arrived at the office with their two witnesses Paula Healy and Patricia Mullane and their two-year-old son James.

However, the Country’s General Registrar had just contacted the Cork Registry Office to inform them that a declaration of impediment had only been signed by the couple that morning. However, the law states that the declaration be signed five days before the marriage.

A visibly upset Ms Murphy said she was very distressed by the sudden development. James was going to be the ring bearer and the couple planned to ‘chill out” at home after the ceremony.

“We are devastated. Absolutely heartbroken. This was supposed to be the best day of our lives. And as usual the Government let us down again. It is beyond ridiculous.”

Ms Murphy said she felt they had been made to look like “eejits” and they should have been informed of the notice period when they booked their marriage last week.

Ms Murphy had planned to give Ms Stoop Murphy the ring her mother, Eileen, wore on her wedding day. Eileen Murphy died 30 years ago with Ms Murphy losing her father Con two years ago. Her father Con was extremely proud of his daughter and attended their Civil Partnership ceremony in 2011.

Speaking prior to the last minute hitch, she said it would have been a poignant day for her.

“My dad would have been so happy to have been here for this. He walked us down the aisle for our Civil Union and it would have been beautiful to have him here today. It’s just the two of us. And our two witnesses.”

The couple met in 2002 when they worked in different shops on the top floor of Merchants Quay Shopping Centre in Cork.

It is understood the pair will reschedule their marriage date. It is important to the couple that Dolores have legal rights over James who is Mabel’s biological son.

“(When we marry) I will be legally recognised as his mother. I will have a legal relationship with him. I have been there with him (when he is sick) but it has always been the case of ‘which one is the real mother?’’