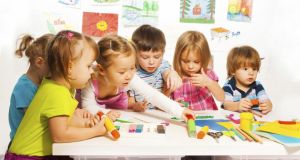 The Child and Family Agency is responsible for inspecting all pre-schools, play groups, crèches and day care services that cater for children aged under six

Senior officials have privately expressed concern that the inspection system for the State’s 4,500 pre-schools is not robust enough to identify services which pose risks to the health and welfare of children.

Internal records show that Gordon Jeyes, the chief executive of the Child and Family Agency, expressed alarm to the Government last year at the fact that IT systems for its early years inspectorate were “inadequate and paper-reliant”.

Mr Jeyes said these deficiencies were affecting its ability to develop an inspection model that could identify “services that are of concern and pose a risk to the health and welfare of children”.

Last year the Government pledged to introduce a stronger inspection regime for preschools following the airing of footage by RTÉ showing children being mistreated in a number of crèches.

Under the Child Care (Pre-School Services) Regulations, 2006, services are required to comply with minimum requirements in areas such as safety and quality of care.

Start Strong, which promotes quality early years education, said the inspection system needed to be fit for purpose to ensure children were getting good quality care and education.

Start Strong director Ciairín de Buis said: “If the system is paper-based, it makes it much more difficult to flag issues of concern. It means we’re relying on individuals to remember incidents rather than issues being automatically flagged.”

Records also show evidence of tension between the agency and the Department of Children over what Mr Jeyes described as a “total lack of consultation” over the recent involvement of the Department of Education in the inspection process.

Last November, the Government announced that the Department of Education was to lead and organise focused inspections on the quality of education in pre-schools. The inspections are aimed at affirming good practice and providing sound advice and recommendations for improvement.

But the agency told the Department of Children the early years sector was moving to a position where there would now be multiple agencies carrying out different functions without any strategic consideration for the sector.

In a paper for the department, the agency said: “These new schemes, coupled with the introduction of new standards and regulations are leading to confusion and will burden the system with extra administration and interaction with multiple agencies.

“It is essential that the full range of welcome Government initiatives in this sector are strategically complementary.”

In an email last year, Mr Jeyes told Elizabeth Canavan, the then acting secretary general, that as regulator for pre-schools he was embarrassed to learn that the Department of Education’s role in inspections was at the request of the Department of Children.

“The lack of consultation is in my view compounded by the absence of strategic overview and the continued, indeed, increasing fragmentation of relationships within the early years sector.

“In any future press enquiries, I shall refer all matters to the Department of Children and Youth Affairs as clearly our role is very limited and it is important that this is fully understood.”

In response, Mr Jeyes said: “It is our job to make complex issues simple and having four bodies involved in early years support does not seem a sensible way forward.”

State body Pobal is also involved in inspections and reviews compliance with the free pre-school year, as well as providing mentoring support to childcare staff.