The science behind the ripples and wakes in water

Irish mathematicians contributed much to the study of waves 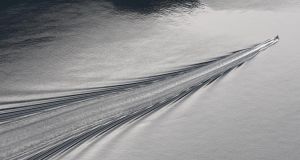 The angle at the apex of the wake of a boat is fixed at about 40 degrees, irrespective of a boat’s speed. This pattern is called a Kelvin wake. Photograph: Getty Images

A stone dropped in a pond generates waves in a beautiful changing pattern, a rippling ring radiating outward from a centre that gradually returns to quietude.

The expanding ring is called a wave packet. Individual waves travel at different speeds, the long ones going fastest and the shortest ones slowest. The overall amplitude is greatest where the waves interact with each other constructively to produce the peak of the packet. The speed of this peak is the group velocity. We can see the individual waves passing through this peak.

The idea of group velocity was proposed by the Irish mathematician William Rowan Hamilton in 1839 and later analysed more completely by Lord Rayleigh in his Theory of Sound. Waves whose speed varies with their wavelength, such as the ripples on a pond, are called dispersive. Fortunately for concert-goers, sound waves are non-dispersive, otherwise a symphony would sound very different at the front and the back of an auditorium.

A stroll in St Stephen’s Green provides us with another consequence of wave dispersion: the beautiful wake pattern that follows a swimming duck. The waves spread out in a triangle, with maximum amplitude along the edges of the V-shaped region and a variety of ripples within it. Remarkably, the angle at the apex of the V is fixed at about 40 degrees irrespective of the duck’s speed.

A V-shaped pattern of wake lines is also found behind a boat crossing calm water. Again, the angle between the lines is surprisingly insensitive to the speed of the boat over a wide range of values. This pattern is called a Kelvin wake, after Belfast-born William Thomson, later Lord Kelvin.

Kelvin knew that in shallow water the wave velocity is the same for all wavelengths. If the boat is travelling slowly, the waves radiate away without any interaction. But if it is moving at speed faster than the waves, two lines or shock-waves form where the waves reinforce each other by constructive interaction. The angle between the shock-waves depends on the speed of the boat.

In deep water, things are very different, and shock-waves form even when the boat is moving slowly. The long waves move faster than the boat, but the short ones move more slowly. The group velocity is half the wave velocity. Kelvin showed that constructive interference between the waves is concentrated or focused along two lines emanating from the boat, with the angle A between them given by sin(A/2)=1/3. This means that A is about 40 degree for the Kelvin wake, whatever the speed of the boat.

Kelvin’s analysis went much further, explaining many additional features of the wakes. He accounted for the feather-like pattern of wavelets that form along the wake lines and for the curved transverse waves found within them. Kelvin had many opportunities to study wakes: he was an accomplished sailor, and owned a schooner, the Lalla Rookh , named after the heroine of a romantic poem by Thomas Moore.


Peter Lynch is professor of meteorology at University College Dublin. He blogs at thatsmaths.com