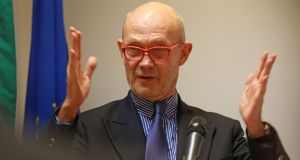 Pascal Lamy said the trade talks were more “a process” than a negotiation. Photograph: Nick Bradshaw

The UK reneging on the Northern Ireland Brexit deal would be a “big break of trust” for the trade talks with the EU, a former head of the World Trade Organisation has said.

Pascal Lamy, a former EU commissioner for trade, said any attempt to backslide on the terms of the Northern Ireland protocol in the withdrawal agreement would be damaging.

“You sign a treaty and a few months later, you say, ‘no, no, no, no, that is not what I meant when I signed’ – you don’t have to be a seasoned diplomat to understand that this would be a big, big break of trust,” Mr Lamy told The Irish Times.

The Frenchman, who was the EU commissioner for trade from 1999 to 2004 and director general of the WTO from 2005 to 2013, was speaking ahead of the start of the first round of talks on Monday on the post-Brexit trading relationship between the EU and the UK.

Concerns were expressed after British prime minister Boris Johnson reportedly ordered his Brexit negotiation to find ways to “get around” the Northern Ireland protocol that puts a trade border in the Irish Sea, requiring checks on goods moving from Britain to Northern Ireland.

The withdrawal agreement between the EU and the UK leaves Northern Ireland legally in the UK customs union but applying EU rules on goods to avoid a hard border on the island of Ireland.

Mr Lamy likened the EU and UK setting out their respective guidelines for the negotiations with the publication of mandates last week to two opposing sides putting on war paint.

“Expect a lot of political posturing at the beginning of this process,” he said.

Describing this as the first negotiation in history where both sides started off with free trade and then discussed what barriers to erect, he said both sides were moving to “less open trade”.

Mr Lamy said the talks were more “a process” than a negotiation given that the EU would not change its regulatory system because of Brexit and that ultimately the discussion was down to how much the UK wished to diverge from the “level playing field” of standards it has now with the EU.

The UK had exited the EU politically and the issue to be resolved in the trade talks with the EU was “how much do they exit economically”, he said.

“The thickness of the border will be determined by how much the playing field is ‘de-levelled’ and that is the open question,” said Mr Lamy, emeritus professor at the Jacque Delors Institute, the Paris-based pro-EU think tank.

“We will not change our system, the Brits will more or less diverge, and we will adjust the thickness of the border.”

He anticipated that the UK government “will be in no hurry to clarify how much they wish to diverge” and that the answer on how far the UK diverges would not be clear for 10 or 15 years.

Mr Lamy predicated that debate over whether the EU or the UK fared better would “haunt” British politics over that period as Brexiteers and Remainers would make opposing claims.

“This will keep moving the politics within the UK system,” he said.

Comparing a possible EU-UK deal to the Canada-style comprehensive free trade agreement – Mr Johnson’s preferred option – was “totally irrelevant”, he said. Canada was “5,000km away” and the EU and Canada had proportionately “very tiny” trade and interpenetration of economic, social and regulatory systems, he said.

Mr Lamy said he believes a Canada-style trade deal would be “very hard” to achieve by the end of the year when the EU economic rules cease to apply in the UK, though it might be possible to agree the broad outline of a future trading relationship in that time.