‘The Quiet Man’: embassy in US feared a false view of Ireland

‘We may have protests’, said Washington counsellor when film premiered in 1952 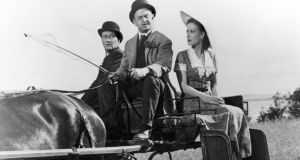 The Quiet Man may now be regarded as a classic, but when it was first shown in 1952 the Irish Embassy in Washington feared it would create a false impression of Ireland and provoke protests from Irish-Americans.

Starring John Wayne and Maureen O’Hara and directed by Irish American John Ford, it was filmed around Cong in Mayo in 1951.

The counsellor at the Washington embassy Joseph D Brennan outlined his concerns about the film in a letter to then Department of External Affairs official Conor Cruise O’Brien on April 17th, 1952.

The embassy’s concerns are revealed in the latest volume of documents on Irish Foreign Policy 1951-1957 to be published later this week.

Saying he had attended a preview of the film the night before, Brennan noted: “The colour is beautiful. The scenery is delightful. But – the theme is not likely to be well received here.”

Brennan wanted to know what the reaction was in Ireland to the film and asked to have a reply as speedily as possible. He did not get a reply until June, because the film had not yet opened in Ireland at the time of his first letter.

In a follow up communication on July 2nd, Brennan said: “If it were to be taken completely at its face value it would be accepted as a rollicking farce and no harm done but I fear it will be regarded by the Irish-American element here as purporting to portray actual life in Ireland. We may then have protests.”

The film is notable for the lush photography of the Irish countryside and a long, climactic, semi-comic fist fight.

In the event little or no exception was taken to the film in 1952 but earlier this year the Irish American writer Malachy McCourt voiced sentiments the Washington embassy feared more than 60 years ago.

“Wife-beating, priest-ridden, blather talking gombeen men getting drunk standing around gossiping and then erupting into stereotypical Irish behaviour,” he said.

In 2013 it was selected for preservation in the United States National Film Registry by the Library of Congress as being “culturally, historically or aesthetically significant”.