Social Democrats call for investment in services over tax cuts 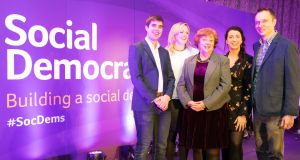 The Social Democrats have called for increased investment in public services in forthcoming budgets instead of tax cuts.

The party’s co-leaders, Catherine Murphy and Róisín Shortall, made the call as they jointly addressed delegates at the party’s national conference in Dún Laoghaire, Co Dublin, on Saturday.

Ms Murphy said the next series of budgets would be based on a significantly expanded fiscal space, which would lead to a choice between buying votes or providing quality services.

“Do we collectively invest in a better health service, education, public transport or childcare?’’ Ms Murphy said. “Or do we want tax cuts which raid the public purse?’’

Ms Murphy said the price to be paid for opting for tax cuts would be a hospital trolley crisis, a housing crisis and traffic jams.

“But the great irony is that those who can afford it will increasingly be forced to put their hands into their pockets to pay for services which, in a functioning society, should already be provided.

“It is time for a new social contract where we pay fair taxes and demand reliable and quality public services in return.’’

Ms Shortall called on the Government to implement Sláintecare, the 10-year plan for the health services which was drawn up by an Oireachtas committee.

“Sadly far too many of our highly trained and dedicated staff have gone abroad to health systems which function properly, value them, and do not operate the kind of health apartheid which is such a shameful feature of our system.’’

“But for too long the Irish health service has been dominated by commercial, professional and religious interests at the expense of the patient. We must change this so that access to healthcare is provided on the basis of health need rather than ability to pay,’’ said Ms Shortall.

“And we also need to greatly expand our primary and community care services so that early care is available, close to home and in a way which achieves better health outcomes as well as better value for money.’’

Ms Shortall said to say Ireland’s low corporate tax rate was the only attraction we had was a great disservice, while also depriving vital services of the income needed to survive and thrive.

“Our industrial policy must involve improving investment in education and training, increasing capital investment in infrastructure, reducing the cost of living in areas like housing and energy, but also significantly cutting out unnecessary red tape for small and medium businesses. It cannot solely rely on a low corporate tax rate.’’

She said the 12.5 per cent corporate tax rate must be the effective tax rate, and not a variation, ranging as low as 1 per cent for the biggest global entities.

“Those global entities are, after all, the ones that benefit most from public investment and so they must be required to make a fair contribution,’’ said Ms Shortall.