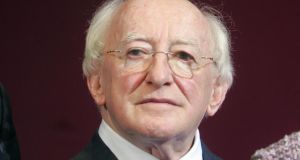 A man who called President Michael D Higgins a “midget parasite” during an anti-water charges demonstration last week has made a qualified apology.

Mr Higgins was heckled as he left Coláiste Eoin in Finglas on Thursday and was called a “midget parasite”, a “sell-out” and a “traitor”.

The episode, which lasted for about five or six minutes, was recorded by one of the protesters and a video was subsequently uploaded to YouTube.

During an interview on Classic Hits 4FM today, Derek Byrne apologised for resorting to personal insults. “I shouldn’t have called him a midget,” he said. However, Mr Byrne said he would not apologise for calling the President a parasite.

Mr Byrne from the Dublin Says No group is one of nine anti-water charges activists who were ordered by the High Court last year to restrain from assaulting, harassing, intimidating, endangering or otherwise unlawfully interfering with or obstructing GMC Sierra workers working to install meters around the country.

A large number of gardaí were present at the protest, which was held after Mr Higgins signed the Water Services into law without referring it to the Council of State to determine its constitutionality.

Mr Kenny said he deplored what happened during the incident, adding that he has been subjected to similar behaviour.

“I have to say that in the last 12 months, I have met quite a number of people myself - and it’s not just anger that they were putting forth - but in some cases absolute hatred.”

Speaking on Newstalk, Mr Kenny said while the public has a right to protest, the President is above party politics.

“He has the constitutional duty in examining the Bills that are passed through the Dáil before they are signed into law by him as President, that’s his duty and his responsibility under the Constitution and it’s not warranted to pillory him in this way simply because he carried out that duty and that responsibility in an apolitical fashion,” he said.

Earlier, Mr Varadkar said the incident was tantamount to “an attack on the Constitution”.

He said the language used during the incident was “below common decency”.

“What strikes me, is that as the water protesters get fewer, they’re getting nastier,” Mr Varadkar told RTÉ.

“Under the Constitution, the President is above day-to-day politics. If a Bill is constitutional he has to sign it. It is not his choice as to whether he signs it or not and to see him targeted in this way is an attack on our Constitution.”

A Labour TD has called on Socialist Party deputy Paul Murphy to condemn the verbal abuse of the President.

Mr Murphy, who took part in the protest in Jobstown last year which saw Tánaiste Joan Burton held in her car, said he defended the right of the Finglas demonstrators to protest but said he did not agree “with personalised comments and midget comments”.

In response, Dublin Mid-West deputy Robert Dowds said the President is above party politics, is not a member of any political party. “Never before in the history of the State has a President of our country ever been targeted like this,” he said.

“Today’s report that Paul Murphy’s only issue with the disgraceful abuse of President Higgins last week was the particularly offensive reference to his size, is absolutely outrageous,” Mr Dowds said. “Mr Murphy is implying that he has no problem with the President being referred to as a ‘little parasite’”, or a ‘traitor’, as he was called on Friday.

“That coming from a thug on the street would be shocking and objectionable, but coming from an elected member of the Oireachtas shows that Mr Murphy is a disgrace to Irish democracy and to common decency,” he said.

“I would like to invite Mr Murphy to come out and condemn unreservedly any verbal abuse of our President of any kind, including all the verbal abuse he suffered on Friday.

“I would also like to invite him to publicly state that the President is off limits as far as protesting goes, as has been the case for every one of the previous eight Presidents of Ireland. Sadly, given the past record of Mr Murphy, I very much doubt that will happen.”

The protest was organised by local anti-water charges protestors including Edenmore Says No, on whose website the video was posted. Its Facebook page had called on people to protest against the President.

A spokesman for the President said he had no comment to make on the matter.