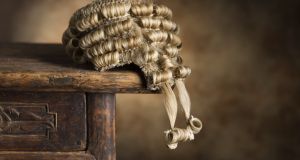 Drawing on interviews with 40 key figures in the selection process, including taoisigh, attorneys general and government ministers over the past 30 years, The Politics of Judicial Selection in Ireland sheds new light on a process that has been shrouded in secrecy since the foundation of the State.

Lawyers’ personal ties to key decision-makers in government are a more significant factor in judicial appointment than political affiliation, according to a new book on how judges are selected.

Drawing on interviews with 40 key figures in the selection process, including taoisigh, attorneys general and government ministers over the past 30 years, The Politics of Judicial Selection in Ireland sheds new light on a process that has been shrouded in secrecy since the foundation of the State.

It also argues that the shortcomings in the current system are due more to the fact that the Judicial Appointments Advisory Board (JAAB) has taken a very narrow view of its own powers than to any design flaw in the system itself.

The book, which is due to be published next week, comes amid increasing scrutiny of the process, with the new Programme for Government containing a vague pledge to replace the JAAB with a new appointments commission.

“Personal knowledge of a candidate will supersede the importance of party political connection because members of government feel they can stand over appointments where they personally know the character and temperament of the individual to be appointed,” Dr Carroll MacNeill writes.

The book also suggests that party political connections are much more important at District Court level than at High and Supreme Court level, and confirms that only a small number of government members have any real say in the process.

Former JAAB members defended the role played by personal ties, telling the author that, in choosing a person to fill such an important position, they were better placed to make assessments as to the competence of people they knew.

While this was not unreasonable, Dr Carroll MacNeill writes, the difficulty was that this may rule out ideal candidates who were not known to the decision-makers. “In an effort to reduce the effects of political networks in judicial appointments, the new process risks replacing those political networks with some other geographic or professional network,” she writes.

The JAAB, set up in 1995, receives applications and sends government a list of recommended names. It is not allowed to rank individuals or identify particular lawyers are outstanding candidates. However, the book reveals how the board has shied away from using many of its powers.

An important change took place quietly in the early 2000s. The law establishing the JAAB required the board to recommend at least seven names for each vacancy. The board initially did so, generally putting forward seven names and thereby limiting government’s discretion. (While Cabinet could in theory pick someone who did not appear on the JAAB list, the fact that it had to reveal publicly that it had done so was a strong political disincentive).

However, in the early 2000s, the books shows, the board unilaterally changed its policy and began to send the government long lists of names, excluding only those who did not meet minimum eligibility requirements. This dramatically widened government’s room for discretion.

“The decision fundamentally changed the role of the JAAB from being a quasi-selection body to being a purely screening body’, writes Carroll MacNeill. The author points out that the Oireachtas was not informed of the change, which met some internal resistance within the JAAB itself.

“It should be a matter of concern to policy makers and legislators in Ireland that such a fundamental change could occur, largely unnoticed by the body politic, to the institutional functioning of a statutory body performing a delegated role on behalf of government.”

The board has taken a conservative approach to its own role in other ways. The book confirms that it has never used its powers to interview candidates or approach potential applicants. Those who apply do not even receive a letter to inform them that they have been unsuccessful.

‘The Politics of Judicial Selection in Ireland’ will be published by Four Courts Press next week.