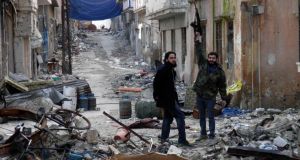 A Free Syrian Army fighter gestures with his gun while he poses for a photograph amid damages in the besieged area of Homs. Minister for Justice Alan Shatter today said up to 30 Irish residents had travelled to fight in the conflict. Photograph: Thaer Al Khalidiya/Reuters.

Up to 30 Irish residents have travelled to Syria to fight in the conflict and a number have lost their lives, the Dáil has heard.

Minister for Justice Alan Shatter said it was estimated that between 25 and 30 Irish residents got involved in the conflict, which he described as a “humanitarian disaster and tragedy of epic proportions”.

He told Fianna Fáil foreign affairs spokesman Brendan Smith it was a matter of great concern for the EU that individuals who took part in the conflict might have been radicalised and “may pose certain threats within member states”.

Many “participated in the conflict under the flag of fundamentalist and extreme organisations” and then returned to the EU.

Mr Shatter said that “from a security perspective An Garda Síochána will continue to monitor developments in this area and take action as required”.

Mr Smith had asked during justice question time if the EU’s Justice and Home Affairs Council had addressed the issue. He pointed to the arrival in Syria since early 2012 of up to 11,000 fighters from more than 70 countries to fight against president Bashar al-Assad.

The Cavan Monaghan TD described the conflict as the “greatest humanitarian crisis of modern times”, which had resulted in 2.3 million Syrian people fleeing as refugees to neighbouring countries, with up to 6.5 million people displaced internally and more than 130,000 killed.

The Minister suggested there were an estimated 2,000 foreign fighters in Syria and the level of involvement of European citizens was “unprecedented in comparison to other recent conflicts”.

Mr Shatter said there was increasing evidence that, rather than helping the situation, they were “merely adding to the chaos and confusion. Many of them no longer know who they are fighting or who is commanding them.

Unfortunately some are being exploited by more malign elements with wider fundamentalist agendas than the Syrian conflict, he said. Al-Qaeda and affiliate groups were among those involved, he added.

The issue was a priority during Ireland’s EU presidency, when EU member states agreed to a review of the EU strategy to counter radicalisation and recruitment to terrorism.

One of the areas being addressed is “how best to manage the foreign-fighter phenomenon”. He added that Ireland was among a small group of “like-minded member states” developing a response to this.

Mr Shatter said a key element in dealing with the problem was a programme of proactive engagement with the communities most affected. “This is with a view to persuading those inclined to travel that there may be more beneficial and positive ways of contributing to a resolution of the conflict than taking up arms.”