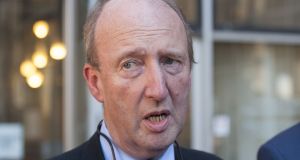 Shane Ross has said the review ordered by the Taoiseach into the operation of US pre-clearance at Dublin and Shannon airports will be completed by the weekend. File photograph: Dave Meehan/The Irish Times

The review ordered by the Taoiseach into the operation of US pre-clearance at Dublin and Shannon airports will be completed by the weekend, according to Minister for Transport Shane Ross.

Speaking in the Dáil on Wednesday, the Minister also criticised US president Donald Trump for his stance on torture.

Enda Kenny commissioned the review of how the pre-clearance process operated in Ireland following Mr Trump’s executive order banning passengers from seven mainly Muslim countries from entering the US and suspending refugee programmes.

The ban is currently suspended pending the outcome of legal appeals.

One plane passenger in Ireland was affected by the ban before it was suspended by a US court.

The review “has been addressed and will be on the Taoiseach’s desk by the weekend”, Mr Ross confirmed in the Dáil.

Mr Ross also addressed his recent call for Mr Kenny not to travel to the US for the traditional St Patrick’s Day visit to the White House.

“I was very determined that my views should be known, not so much about the pre-clearance or the executive order made by Trump, which I thoroughly disapprove of.

“I felt that the issue of torture is something that I couldn’t stand over and I found it difficult that we should give any kind of credence to a president of the US who had approved of torture. To me it is uncivilised.”

Anti-Austerity Alliance-People Before Profit TD Mick Barry asked if Mr Ross would “add to your credibility” and call for the end of US pre-clearance in Irish airports, if “such a blatant Islamophobic action is put in place”.

Fianna Fáil transport spokesman Robert Troy also asked if the review had been “shelved” because pre-clearance at Shannon and Dublin was of major economic benefit to Ireland.

Mr Ross said the Departments of Transport, Foreign Affairs and Justice were dealing with the review.

He said the review “is, as we speak, being collated in the Department of Justice and will be in the Taoiseach’s office by the end of the week”.

Mr Barry had raised the issue during transport questions in the Dáil.

He questioned the operation of US pre-clearance in Ireland, in which immigration and customs for passengers entering the US is dealt with at Irish airports rather than on American soil.

The Minister said Mr Barry had raised serious issues about jurisdiction and whose lawful territory passengers were in during the pre-clearance process.

“The pre-clearance facilities at Dublin and Shannon airports are within Irish jurisdiction and the laws of Ireland apply at all times,” the Minister said.

However, he added that passengers using pre-clearance did so on condition that they recognised and consented to the right of the US to grant or refuse pre-clearance in accordance with its law.

“No Irish official has any role in determining eligibility of admission to the US at the pre-clearance at Shannon or Dublin.”

The Minister said: “A refusal at US pre-clearance has no impact on the rights available to refugees or persons seeking asylum.”

If a person is refused leave to board a US-bound flight, the person then becomes the responsibility of An Garda Síochána, which deals with them in line with Irish law.