When the Taoiseach whips out his little jotter, you know he means business 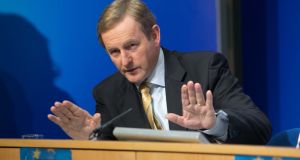 The Taoiseach is a great man for the spiral-bound notebooks.

He writes everything down in them during Leaders’ Questions in the Dáil. When Enda Kenny whips out his little jotter, you know he means business.

So he was taking the Senators very seriously indeed when he called to see them yesterday, immediately producing his neat A4 (lined) copy and setting it on the table.

The Senators were delighted to see him. Or at least the ones who bothered to turn up.

They love a bit of attention and praise, particularly when they talk. They talk a lot and it breaks their little hearts when people don’t listen.

But what makes them really happy is an official visit to their cosy den from the Taoiseach of the day. They go all warm and fuzzy inside.

Enda arrived after lunch, all set to rub them behind the ears.

He was led into the parade ring by Leas Cathaoirleach Paul Coghlan and Leader of the House Jerry Buttimer.

The two Fine Gaelers were bursting with pride, bouncing along in front of their illustrious charge as if he had just won the maiden hurdle in Ballinrobe for them.

Frankie Feighan took the opportunity to tell the press gallery that he would be leaving early but this was in no way to be taken as a snub to his party leader (who appointed him to the Upper House as one of his Chosen Few). He had to go to a meeting.

The former TD heard most of Enda’s speech before rushing away. It was a soporifically dull effort.

The Taoiseach told the Seanad about his programme for government and repeated all the things he has been saying in the last few weeks about Brexit, the budget, housing, Europe and the citizens’ assembly. With envious eyes, we watched Frankie go.

The acoustics were dreadful. Enda read his script slowly and very softly, like his batteries were running out.

Fianna Fáil TD Jim O’Callaghan came in for the beginning. He hightailed it out of the gallery after 10 minutes. Lucky Jim.

The Taoiseach was most anxious to reflect “the new political landscape” by breaking old political news. His tone was so gloomy and subdued it felt like he was making a speech in the aftermath of a tragedy.

There are “many challenges ahead” when it comes to “building a new vision”. Partnership government has been “embraced” in “a new and collaborative approach”. Even the Opposition is on board.

“It is a way of government that is genuine,” stressed Enda, putting heavy emphasis on “genuine” in case some people might not believe it.

He had a big finale for the Senators, where he talked about his commitment to Seanad reform. There will be committees and everything.

Enda turned over a fresh page in his spiral-bound copybook and lifted his pen.

She appeared to have mislaid her speech, reading what sounded like a school essay on Brexit, Seanad reform and the state of the mushroom industry.

Her colleague Jennifer Murnane O’Connor was much livelier. She give Enda a right ear-bashing over the need to give fair play to local authorities.

Michael McDowell must have been on a cruise over the holidays. “There are many domestic squalls surrounding this Government,” he announced.

“It is my hope that the Government keeps a firm hand on the tiller . . . and we don’t allow ourselves to be buffeted too much.”

Sinn Féin’s Rose Conway-Walsh, a very impressive addition to her party’s Seanad team, had questions on Brexit, while university Senator Alice Mary Higgins ably demonstrated that the apple never falls far from the tree with a very thoughtful, wide-ranging and articulate contribution.

Although we noted some lip-curling from some of the lads in the chamber when she asked the Taoiseach to expand on his Government’s commitment to gender-proofing and equality-proofing measures across all departments and how the budget would be similarly proofed.

Meanwhile, Father of the House David Norris tried to use his exalted position to beg a private audience with the Taoiseach some time in the future, so he could tell him about his radical plans for proper Seanad reform. Ten minutes would do him.

The rest of the chamber stayed oddly quiet, but that’s what unconsciousness does to people.

House leader Buttimer (another one who loves to talk a lot) thanked his boss for gracing their humble house with his magnificence, hoped they will see more of him in the future and told him he’s doing a grand job.

As for the Senators, “we must go beyond the gates to reach out to the public”.

He didn’t get to Alice Mary’s one about gender-proofing and equality-proofing, but he managed to say “this budget will contain a Brexit proofing”.

He buttered the Senators up on the reform issue and then, to an unmerciful roar of approval from Norris, said he’d be back before Christmas.

And furthermore, to the further unfettered joy of Norris, the Taoiseach told him they could meet for an hour. Brave man, Enda.

The Taoiseach departed to handshakes and a round of applause from all sides.

He wouldn’t get that in the Dáil.