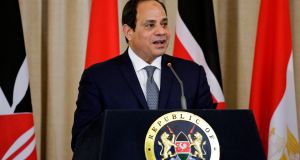 Taoiseach Enda Kenny will raise the case of Ibrahim Halawa again with the president of Egypt, but said the response would be the same as that given to the Irish delegation who visited Egypt last month.

“I am sure his response will be the same as that given to the Ceann Comhairle and his delegation to Egypt, namely, that he is prepared to use his presidential powers but there must be a conclusion to the case,” Mr Kenny said.

The Taoiseach said he had spoken twice to Egyptian president Abdul Fattah al-Sisi about Mr Halawa, both face-to-face and on the telephone.

Mr Halawa had received 55 consular visits from the Irish Embassy in Egypt, and Minister for Foreign Affairs Charlie Flanagan had been in touch with the Egyptian ambassador on numerous occasions.

Mr Kenny was responding to Labour leader Brendan Howlin, who pointed out that Mr Halawa’s trial had been postponed 19 times and called for another initiative by Government to secure the 21-year-old’s release.

The Irish man was arrested in a mosque in Cairo in August 2013 after protests against the removal from office of then president Mohamed Morsi.

Mr Halawa is reported to be on hunger strike and was recently transferred from prison to hospital for treatment. He is on trial with more than 500 other prisoners, and there have been repeated postponements of proceedings.

Mr Kenny insisted the Government supported the legal action being taken by the Halawa family and “will continue to make every effort to see to it that this young man can be brought home as soon as possible”.

Mr Howlin said that following a Dáil motion on July 7th it was agreed that an all-party delegation would visit Egypt to highlight Mr Halawa’s case.

They “met a number of influential people, including the Egyptian president, and came back with some degree of hope that the case would be resolved. Unfortunately, that has not proven to be the case,” Mr Howlin said.

“It has gone on far too long and Ibrahim’s health is suffering,” the Labour leader added.

“He is an Irish citizen who has been detained in an Egyptian prison since he was 17 years of age. Can we take another initiative to ensure that what was hoped for, which is the release and return home of Ibrahim, will happen?”

Mr Kenny said he was concerned about Mr Halawa’s case. “He is the only European in this situation and the president made it perfectly clear that he is quite willing to use his power of presidential pardon, but that there has to be a conclusion to the case, which is where the difficulty lies.”