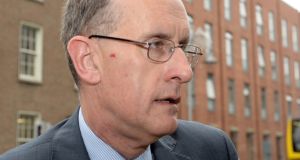 The head of Dublin City Council has said something is “seriously wrong” in the delivery of rapid-build modular housing, with projects delayed by nearly two years.

Delays due to design, planning and procurement issues have held up two modular housing schemes, which are billed as being quicker than traditional construction projects.

One 70-unit “rapid” development on Bunratty Road in the north Dublin suburb of Coolock and another five-unit city centre development on Fishamble Street were announced in November 2016. Originally scheduled to be completed by the end of this year, both projects are now not estimated to be finished until late 2020.

Last April, Mr Keegan wrote to Brendan Kenny, the head of the council’s housing services, saying it appears “there is something seriously wrong” with the delivery time frame.

Responding to the concerns, Mr Kenny said several of the current rapid-build scheme sites were “problematic,” and that the rapid aspect “does not kick in until the contractor goes on site”.

“I do accept that is has taken far too long to get to where we are now and it is essential that we speed up all such projects within the pipeline,” he said in an email on April 25th.

Speaking to The Irish Times, Mr Kenny said the two modular apartment projects were the first of their kind, which had led to design and procurement taking longer than expected. “Public procurement is as slow as it ever was. It’s faster when we get on site,” he said.

A draft submission prepared for Minister for Housing Eoghan Murphy in January said the council planned to return 800 “voids” a year, for the next four years. Voids are vacant local authority homes that require a significant amount of work to be brought back into use.

Questioning the estimates, Mr Keegan said he “would have thought that we have eliminated most of the backlog of voids at this stage”. More than 2,866 voids have been refurbished in the last three years by the council.

The 3,200 voids the local authority plans to return to use over the next four years are not units that were long-term vacant, as previous voids had been, Mr Kenny told The Irish Times.

“Our social housing stock is quite old. We still anticipate we will have houses where an older tenant may die, who had been living there for maybe 30 years. That house has to be seriously renovated,” he said.

The majority of voids that had been returned to use in recent years had been vacant for several years, he said.

Mr Keegan also said it was “disappointing” the local authority estimated it would directly build fewer homes this year compared with 2017, down from 235 to 217, emails from late January show.

There was “very significant political importance” behind hitting social housing construction targets in 2018, he said, and asked if any rapid-build schemes could be brought forward to help meet the targets.