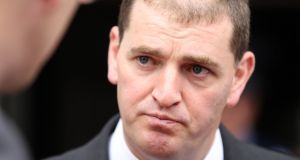 Minister of State for Defence Paul Kehoe has said the choice of malaria drug was a matter for the Defence Forces. Photograph: Alan Betson/The Irish Times

Defence Forces personnel serving in sub-Saharan Africa will continue to receive the anti-malaria drug Lariam, which has been withdrawn from the Irish market.

Minister of State for Defence Paul Kehoe told the Dáil the choice of malaria medication was a matter for the Defence Forces, and the medical corps had advised him that “Lariam is the most suitable drug” for personnel serving overseas.

Fianna Fáil defence spokeswoman Lisa Chambers, who said her party had believed for some time that use of Lariam had caused serious problems for the Defence Forces, called on the Minister to publish the advice he had received.

Mr Kehoe said that would mean providing advice on every member of the Defence Forces but Ms Chambers said she was seeking the advice the Minister had received on the drug Lariam not on individuals.

Mr Kehoe also said he was aware of reports that a former senior UK military officer had apologised to troops who were given the anti-malarial drug Lariam, but he said “it would not be appropriate for me to comment on the policy and practices of other states in this regard”.

Ms Chambers said the Minister appeared to be ignoring the facts. She said thousands of British soldiers had been affected and the British ministry of defence had acknowledged the negative impact.

She said the buck stops with the Minster and asked if he believed that he or “any other minister with responsibility for defence matters will one day have to stand up in the Dáil chamber and apologise for the prescription of Lariam for our troops”.

The Minister insisted he was satisfied based on the best medical information and evidence he had been given, that this was the best malaria prevention method.

He said the controversial drug’s manufacturer Roche Products (Ireland) Ltd informed the Defence Forces in August 2015 and it would discontinue Lariam in the Irish market from July this year.

“I understand Roche has indicated that its decision is based on a commercial assessment,” he said.

Sinn Féin defence spokesman Aengus Ó Snodaigh said he had been raising the issue since 2007 and seven ministers “have taken the same position as the Minister of State”.

Fifty claims have been lodged against the State by serving and former soldiers who had been administered the controversial drug.

Mr Ó Snodaigh said while the Minister could not comment on individual cases “does he seriously believe Roche when it states it is withdrawing on commercial grounds”.

The Dublin South Central TD said “there is no way the company would admit it was withdrawing on medical grounds because that would open it up to a huge number of claims not only in Ireland but also throughout the world”.

The Minister said however that “I have to believe Roche when it informed the former minister for defence that it was pulling out of Ireland for a commercial reason. I have been given no information or evidence to state otherwise.”