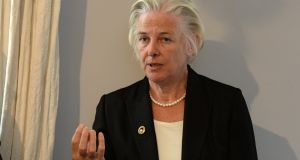 Former head of the European Commission Service Catherine Day has been appointed to chair the new Citizens’ Assembly on gender equality.

The assembly was originally scheduled to be up and running by the end of October but Mr Varadkar said it was now intended that the assembly would meet for the first time before the end of the year and will run over six months.

The Taoiseach told his Fine Gael party colleague Kildare North TD Bernard Durkan who raised the issue, that the secretariat was already in place and the next stage was to select 99 citizens to participate in the new assembly.

They will be chosen through random sampling of the electorate from the electoral register, following the completion of a tender process for a polling company to carry out the selection process.

A referendum on the deletion of Article 40.1.2 of the Constitution was postponed to allow a citizens’ assembly to consider its provision that “the State recognises that by her life in the home the mother gives to the State a support, without which the common good could not be achieved”.

Once its work is completed the chairwoman will report back to the Government with specific proposals on gender equality.

A subsequent citizens’ assembly is to be held on the optimum form of local government for the Dublin local authorities. That assembly, with a different 99 voters, will look at the issue of a directly-elected mayor, the powers they might have and whether the capital should continue to have four local authorities.

Plebiscites were held in Cork, Waterford and Limerick on whether to have a directly elected mayor. Only Limerick accepted the proposition.