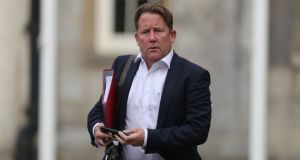 Minister for Housing, Local Government and Heritage Darragh O’Brien: ‘Not surprisingly given the decision of the council, they need some time to talk to councillors to seek consensus on how the land should be developed.’ Photograph: Niall Carson/PA Wire

The future of the Oscar Traynor site in North Dublin will be part of discussions when Minister for Housing Darragh O’Brien meets Dublin City Council management on Wednesday.

The meeting follows the collapse last week of plans to build 853 homes on the site, one of the largest owned by Dublin City Council. It came after councillors voted against the proposal for 428 homes to be sold privately by a private developer with 253 social homes fully funded by the Department of Housing and 172 sold as affordable homes to those on low and middle incomes.

Mr O’Brien said he sought a report from the council on the issue and received a “short” one. “Not surprisingly given the decision of the council, they need some time to talk to councillors to seek consensus on how the land should be developed.”

The Minister said he would seek all party consensus on how to develop the site and he urged the City Council and councillors to work towards a “realistic and deliverable proposal that we can live with on this site”.

But he warned: “I don’t want this to go on for months.” He said “I don’t want to see another protracted discussion back and forth”, adding that “we don’t have the luxury”. The site, in council ownership since 2007, had been vacant for far too long.

He said he would work with others on it but they “won’t be held to ransom by a small number of councillors with ideological opposition to certain different types of housing tenure”.

He said that if Mr O’Brien “wants to demonstrate that your Ministry is radically different from your predecessor Oscar Traynor is your opportunity to prove that.”

The Dublin Mid-West TD said the council needed options and could not “pluck funding models out of the sky”.

The Minister said they had an opportunity to develop the lands and he said some local authorities were better at delivering housing than others but they needed to deliver 33,000 homes private and public next year and 17,000 this year.

He added that “sometimes people want the absolutely perfect scheme that fits their ideology” but they had to be realistic.

Social Democrats TD Cian O’Callaghan said that if the proposed development had gone ahead on Oscar Traynor road “it would have resulted in almost half the site going to an institutional investor and being rented back to the State” through the housing assistance payment.

People Before Profit TD Richard Boyd Barrett said sites had sat vacant for years because the Government had insisted on private capital being involved.

He said that in his area under existing models €2,000 in rent is being paid monthly to private landlords and over 25 years €580,000 would be paid for social housing but the State would not own it at the end.

He pointed to a report from the Department of Public Expenditure and Reform stating that buying a house in turnkey would cost €80,000 more than it cost the local authority to build and it was cheaper in the end. It was time to let local authorities build houses, he said.

Mr O’Brien pointed out however that Dublin City Council had owned the site since 2007 and the site remained vacant.

The Minister added: “We are interested in letting local authorities build and that was why the Government raised the discretionary cap to €6 million a year.”