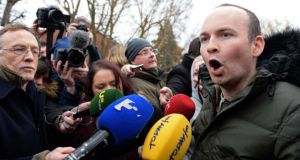 Anti-Austerity Alliance TD Paul Murphy has criticised a decision by the Director of Public Prosecutions (DPP) to charge those suspected of involvement in the protest that saw Joan Burton trapped in her car. . Photograph: Eric Luke

Anti-Austerity Alliance TD Paul Murphy has criticised a decision by the Director of Public Prosecutions to charge people suspected of involvement in a protest that saw Tánaiste Joan Burton trapped in her car.

Mr Murphy last night told The Irish Times it was “completely wrong” that news of the charges broke via the media before any of those to be charged were informed.

“It is scary, especially for those young people who joined a protest for 2½ hours and now find themselves possibly facing false imprisonment charges,” the Dublin South West deputy said.

“The whole thing is politically motivated. It was no coincidence that on the day the first arrests were made, all four people arrested were political activists.”

Mr Murphy said he thought it was likely that he would be one of the people charged. “We know from the line of questioning of others that I was being fingered as a ring leader.”

The Irish Times understands charges against Mr Murphy and two other elected representatives have been approved by the DPP.

Of the 40 suspects detained for questioning after the protest, around half will appear before the courts in coming weeks. They will go on trial before a jury at the Dublin Circuit Court.

The most serious charge is that of false imprisonment. Other protesters will also appear before the courts in relation to violent disorder, public order and criminal damage charges.

On RTÉ radio this morning, Mr Murphy has said he was not happy with how the gardaí had operated in Jobstown.

“Do I think this was political policing? Yes, absolutely,” he said.

“Ten days of arrests one after the other in the context of a movement that challenges the Government on water charges. That is not normal Garda procedure, and gardaí contacted me afterwards to say that that’s not normal procedure.”

Mr Murphy told RTÉ’s Morning Ireland that people had protested against Ms Burton because “she’s hated”. He said she was responsible for “a sell out on the water charges, for cuts in child benefit, loan parents, rent allowance, so she’s hated in that community right”.

Ms Burton and a political aide were trapped in their car for a number of hours on November 15th when protesters surrounded the vehicle and staged a sit-down protest as the Tánaiste tried to leave a graduation ceremony at the An Cosán College in Jobstown.

“I don’t think that anybody should have been arrested or should face charges for participating in a protest that delayed the Tánaiste for a couple of hours.”

It has emerged that of the estimated 40 suspects detained for questioning, around half will appear before the courts in coming weeks. They will go on trial before a jury at the Dublin Circuit Court.

The most serious charge is that of false imprisonment. Other protesters will also appear before the courts in relation to violent disorder, public order and criminal damage charges.

Mr Murphy said to describe what happened in Jobstown as false imprisonment would be stretching to definition of the term to a “farcical” extent.

When Ms Burton was taken from the car being blocked and walked to another vehicle by gardaí a number of missiles were thrown at her.

She was hit on the head by a water balloon. Other objects, including bricks, where thrown at gardaí and their vehicles.

A number of gardaí who moved in to surround Ms Burton’s car had items of equipment and uniform stolen.