The government have released a video to coincide with their bit to have a seat on the UN Security Council. Video: Merrion Street 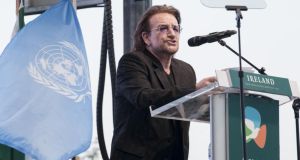 Bono joked that ‘the worst thing’ he could say about Canada was that they are ‘nice’. Photograph: Kim Haughton 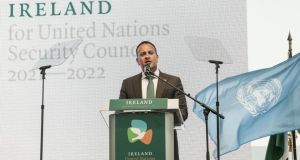 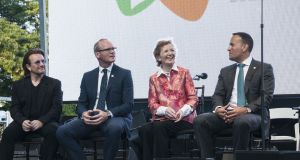 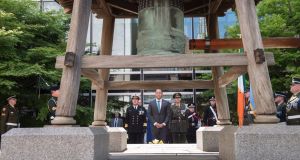 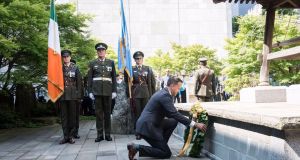 U2 frontman Bono gave his full-throated support to Ireland’s bid for a UN Security Council seat saying that “storytellers” were needed to explain the future importance of the 193-nation body.

Swapping a stage of musicians for political leaders, an activist and a diplomat, the singer was the headline act at the Government’s formal launch of its campaign at UN’s headquarters in New York City on Monday night.

Addressing UN ambassadors at an event celebrating Irish food, music, heritage and culture, Bono referred to political turmoil, saying an international order based on shared values and rules was “facing the greatest test in its 70-year history.”

Bono warned that “we live in a time when institutions as vital to human progress as the United Nations are under attack.”

He added that the existence of the European Union, the G7, NATO and the WTO were being threatened.

Referring to US president Donald Trump’s decision to withdraw from the 2015 global climate change agreement, he said in exasperation: “Paris . . . f***k!”

Mr Varadkar told an audience of several hundred people that the UN was “stronger acting together” and that “in these troubled and uncertain times” Ireland “as a global island” wanted to “play our part in defending, supporting and promoting its values.”

Ms Robinson said she endorsed her country’s commitment “to do the difficult thing” and seek membership of the security council which was “not easy.”

“It is a hard, hard labour of love if you really love what the UN stands for and I think Ireland really does,” she said.

Mr Coveney said that with Ireland the UN knows what it would get: “a small country with big thinking, a country that listens and a strong independent voice.”

In an emotive speech next to a sculpture by Dublin artist John Behan depicting Irish emigrants disembarking from a ship in New York in the 19th century, Bono evoked Ireland’s history of colonialism, conflict, famine and mass migration as experiences that make the country well placed to serve on the UN’s most powerful body.

“If you look at the agenda of what the Security Council will be called on to address over the coming years: doesn’t it look a lot like us?” he said.

The Irish had “not forgotten what it’s like to live in danger and desperation,” he said. “It is the air we used to breathe, even in the Dublin of my youth in the 60s and 70s.”

Bono paid tribute to the UN but warned of the dangers it faced as countries such as the United States, which last month withdrew from the UN Human Rights Council, are stepping back from multilateralism.

The singer said the choice was not about a seat on the security council, but about the UN as a whole.

“It’s about its future and indeed whether it has one, whether its values still matter - and they better; whether peace is still possible and who will speak for those normal ideas when the heat is on,” he said.

Speaking on a sweltering Manhattan night, Bono said that “standing here, in that heat, the heat of a moment suffused with possibility and peril,” the UN needed “storytellers” because words mattered and that one word mattered in particular.

“The word is compromise because that’s how you achieve peace and compromise is a word that the Irish people understand very, very well, It is part of our story, our recent story, and we are storytellers,” he said.

“So your honorable peace activists, if you need some storytellers to describe what’s really important about this place… let us tell the story.”

He urged the UN to “all become storytellers of a future we want to share” and that the story needed to be told “with imagination and passion and conviction.”

“We are storytellers but this is the best story ever,” he said of the UN.

Ireland faces stiff competition for the council seat from Canada and Norway, two countries with formidable records at the UN, if it is secure the required 129 votes out of 193 if it is win a seat.

Bono joked that “the worst thing” he could say about Canada was that they are “nice.”

“And Norway?” he said. “Who can ask for a better neighbour, a more committed peacemaker? Here’s the worse thing I can say about them: they are tall.”