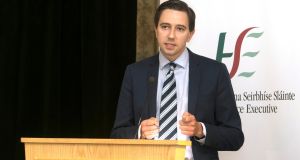 Minister for Health Simon Harris insisted the citizen’s assembly was the most appropriate way to deal with this issue of the Eighth Amendment to the Constitution which gives equal rights to the mother and unborn child. Photograph: Photocall Ireland

Mr Harris said he was following the Twitter updates, adding that it was important to hear the reality many women faced.

However, he insisted the citizen’s assembly was the most appropriate way to deal with this issue of the Eighth Amendment to the Constitution which gives equal rights to the mother and unborn child.

“I have said on the record of the Dáil we need to debate this and ultimately, my generation needs to be afforded an opportunity to have a say on this, but I do think the best way of addressing this is through a citizen’s assembly,” he said.

“This requires constitutional change. Legislation cannot change this situation and it is important that we debate and discuss all of the issue and a citizen’s assembly provides an important forum where that can take place.”

Mr Harris, who has previously spoken in favour of having a referendum to replace the Eighth Amendment, said the assembly would be the first opportunity to discuss the issue in detail.

He said a mature and respectful discussion was necessary and it was important to reach consensus early on.

The Twitter updates, which gained thousands of followers, detailed a woman’s journey to Britain to have an abortion. She was accompanied by a second woman and both began documenting the journey early Saturday morning.

Their journey has attracted commentary from US television host James Corden, Sinn Féin’s health spokeswoman Louise O’Reilly and Senator Lynn Ruane, along with the National Women’s Council of Ireland. Most tweets are directed at Taoiseach Enda Kenny, who has not yet responded.

Figures released by the British government show that nearly 3,500 women with Irish addresses travelled to England and Wales for an abortion in 2014.

Media coverage of the Twitter campaign has been criticised by activists who are against liberalising the abortion law.

“The fact of the matter is we’re only ever hearing from one side of the story,” said Niamh Ui Bhriain of the Life Institute.

“How much of the reporting around this actually discussed the reality of abortion? How often do we hear from women who have undergone abortions and regret it?”

“No matter how much we want to brush this issue under the carpet, abortion is a reality, it exists, our laws make absolutely no sense.”

But Ms Ui Bhriain said: “There’s something very disquieting about the Twitter campaign - it’s more like a planned and coordinated campaign than simply somebody sharing their personal story.

“The reality is being ignored: there are plenty of discussions in the media as to the fact that Irish women travel for abortion, but there’s no mention of the baby who has been killed.

“It’s always sad if a woman is made to feel that she has to have an abortion, or that she has no other option - and of course it’s a heart-breaking tragedy when a baby has her life brutally ended by abortion. Though we’ve heard very little about that reality,” Ms Ui Bhriain said.

1 At least eight shot dead in German town of Hanau
2 A Russian cruiser with ‘cannibal rats’: What other ‘ghost ships’ could be out there?
3 DUP pleads with UK to reduce salary threshold for migrant workers coming to North
4 Person claiming to represent ‘ghost ship’ owner comes forward
5 ‘If all the immigrants go back, who will work in the meat factories and do the crap jobs?’
Real news has value SUBSCRIBE