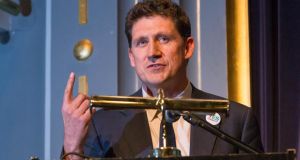 Eamon Ryan, Green Party leader, was critical of Taoiseach Enda Kenny for the position he has taken on Greece. Photograph: Dylan Vaughan.

A Green Party plan to create 10 new regional banks around the country is being examined for feasibility by the Department of Finance.

The plan to create the publicly-owned banks with €100 million in capital was disclosed by party leader Eamon Ryan and the party’s finance spokesman Mark Dearey at the party’s national conference in Kilkenny on Saturday.

Such banks already operate successfully in Germany. In his keynote speech Mr Ryan said that the banks would be bigger than credit unions and would be owned by local authorities. He said the deposits in these banks would be raised locally and then used locally.

Mr Dearey has worked on the idea for some time and the party approached Minister for Finance Michael Noonan with the plan. He has asked his Department to conduct a feasibility study on the approach.

The party lost all its six Dáil seats in the 2011 general election and also lost State funding after failing to reach the required 2 per cent of the national vote. The party has received some modest support and did win 12 seats throughout the State in last year’s local elections.

“Ironically not having State funding and having [other] challenges has brought out the resilient and sustainable best in us,” deputy leader Catherine Martin told the more than 200 delegates at Langton’s Hotel in Kilkenny.

In his speech Mr Ryan said that the party would stay true to the principles of the 1916 proclamation and make no false promises; her to vision Patrick Pearse had of the education system that it was more than a murder machine; begin a new green industrial revolution; reform the banking system and revive life in rural Ireland.

He criticised Taoiseach Enda Kenny for the position he has taken on Greece: “I don not think it is right for our Taoiseach to be publicly kicking the representatives of the Greek people when they are down,” he said.

He rejected what he called the “narrow divides between so-called left and right alternatives” that are being set out by Fine Gael and Sinn Féin.

“It may suit them. It does not suit Ireland,” he said.

He said the Green Party’s own republicanism was expressed by a principle it had held since its foundations, that all decisions should be taken at the lowest effective level.

He set out some of the decision-making that should be returned to local level. He said that decisions on loans and mortgages should be made by local bank managers – as they were in the past – rather than made centrally.

“The bank managers really know their customers and can make lending decisions in an assessment of the person’s character and ability to pay a loan.

“We have to end the policy to meet quarterly targets and short-term profit expectations.”

Among the other ideas were for local post offices to become digital communications hubs, where families could store digital archives, including photographs. Mr Ryan also proposed that every child in primary education in the State should be entitled to a school meal each day sourced from local produce. He suggested the regional banks could also provide loans to small construction companies to retrofit and insulate homes in the local community.