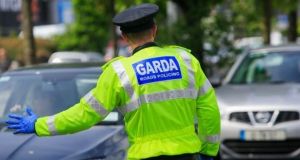 Minister for Justice Helen McEntee said that € 9 million had been budgeted for the Garda vehicle fleet. File photograph: Collins

The coronavirus pandemic is expected to cost An Garda Síochána €17.5 million while the Prison Service bill is expected to be between € 4 million and € 5 million.

During a Dáil debate on the revised Estimates, Minister for Justice Helen McEntee said gardaí faced a significant challenge and introduced measures “to counteract the impact of the pandemic throughout the State” and maintain frontline services.

The gross expenditure estimate for the Garda Síochána allocation is €1.879 billion, representing 63 per cent of the entire funding for Justice.

Measures to minimise the risk of infection included revised rosters and longer shifts to avoid cross over between members of the force, resulting in the increased cost of the unsocial hours payment.

There were “significant quantities” of personal protective equipment (PPE) and this is expected to continue until the end of the year with costs estimated at €13 million.

She said that €9 million had been budged for the Garda vehicle fleet and an addition €3 million was added, while the force spent €1.5 million to hire 210 extra vehicles for community policing, over six months.

“For example, if as expected there will be an underspend in building capital, this will be utilised to offset the additional fleet investment costs due to Covid.”

Ms McEntee told TDs there were now 14,700 gardaí and 3,020 civilian employees in the service.

PPE, pay and overtime costs for prison officers covering for colleagues in isolation, and additional video link equipment for court appearances to take place remotely are the main contributors to the estimated €5 million bill for the Prison Service.

The service has been praised internationally for avoiding Covid-19 and no prisoners contracted the virus because of the precautions taken. The final bill will be determined by how long the pandemic lasts.

The Minister said there would also be extra costs for direct provision services including additional hotel accommodation, PPE and self-isolation costs. These figures would be dealt with in September.