Miriam Lord: Would he well up? He didn’t, on this day every prime minister dreads

Harry McGee reports from Government Buildings as former taoiseach Enda Kenny walks out of the gate for the last time, to be greeted by the media and curious tourists. Video: Bryan O'Brien 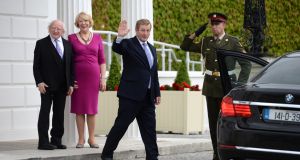 President Michael D Higgins with his wife, Sabina, as Taoiseach Enda Kenny leaves Áras an Uachtaráin after delivering his letter of resignation to the President. Photograph: Dara Mac Dónaill

So it’s not true that the nice guys always finish last.

Enda Kenny is the living proof.

Business will always be business, but on a personal level, the departing Taoiseach’s erstwhile political adversaries hadn’t a bad word to say about him after six years of crossing swords across the chamber floor.

There was one graceless exception in an afternoon when the warmth and sincerity of Opposition tributes to Enda stood as testament to his undervalued ability to lead through troubled times without stacking up enemies in the process.

That discordant note was struck by Ruth Coppinger of Solidarity, who used the occasion of Kenny’s retirement to make a political speech on a very serious issue relating to yet another cruel consequence of Ireland’s abortion law.

It will be, and deserves to be, discussed by parliament when the new taoiseach takes over. But yesterday was the wrong time and Coppinger’s sour intervention was greeted with stony silence from all sides of the House.

Enda admitted he wasn’t keen to sit through speeches about himself – “either glorification or flagellation” – and had hoped to leave quickly and quietly. But that’s not the way things work in Leinster House. And he knew it.

To have had nothing to mark his contribution would have been worse. And he knew that, too.

When the time came, his wife, Fionnuala, took her place in the Distinguished Visitors Gallery along with Ferdia, one of their three children; and Kieran, the Taoiseach’s brother. They were joined by his long-time adviser, Mark Kennelly and Sarah Moran, the PA who has minded Enda over the years.

The chamber was full for the occasion. Staff members from Government Buildings looked down on proceedings from the public gallery, some in tears. Fine Gael Senators filed in for the last session.

All smiles and nonchalance, Enda broke the habit of a lifetime and arrived on time. He nipped to the side for a quick word with Fionnuala, who always kept out of the limelight during his time in office but is acknowledged as his most trusted adviser and confidant.

“Are you going to announce an election?” she laughed, noting the full House and expectant TDs.

“Yeah, I am!” he chuckled, before heading down the steps.

The ministerial benches were fully occupied. Last to take his place was Leo Varadkar, who will become taoiseach today. Simon Coveney, the man he defeated for the Fine Gael leadership and who is now deputy leader of the party, held his seat until he arrived.

Enda made a short speech, his voice thickening at times as he worked his way through it. He spoke of the importance of politics, while accepting the public’s sense of disillusionment with the process. He talked of respect and how he feels “truly blessed” to have been given the chance by the people of Ireland and Mayo to “work hard at work worth doing”, as Teddy Roosevelt said.

“For me, cynicism is always an easy cop-out.”

Enda could never be called a cynic.

“I really believe that politics is work worth doing, a noble profession.”

Around the chamber, political friends and foes nodded their accord.

There was every chance he would well up. But he didn’t, on this day that every prime minister dreads.

His valedictory address was greeted with sustained applause. Enda sat down, then threw his hands in the air for a second and shrugged. That’s that, so. He looked sad.

But the Fianna Fáil leader raised his spirits with a perfectly pitched contribution. Micheál Martin, who has known Enda longer than most, was thoughtful and generous in a speech liberally peppered with humour.

Throughout his time in politics, Enda has always been a proud representative of the people, said Martin. “He is today, as he always has been, an Irish patriot and democrat.”

But he also captured Enda’s mischevious side, remarking how the Taoiseach thoroughly enjoyed wrongfooting pretenders to his throne into issuing “lengthy statements describing him as the greatest Irishman since Brian Boru”.

Gerry Adams was also generous in his praise. In fact, the Sinn Féin leader was surprisingly effusive, going above and beyond the requirement of convention and courtesy.

Enda was the Carlsberg Taoiseach – “probably the best leader Fine Gael ever had.”

And, with obvious affection, Gerry declared: “I will miss you.”

The Taoiseach managed a touching thumbs up.

Labour’s Brendan Howlin soldiered in government with Fine Gael. He went closest to capturing the essence of Enda Kenny, and his winnng personality.

He recalled his defining characteristic. “Quite simply, his boundless enthusiasm.” And while he is a skilful politician, “I think it is the hopeful, happy Enda Kenny that the Irish people will continue to identify with most.”

Bendan reminded TDs that Enda took over during a dismal period. As the economic crisis took its toll, his high-fiving sunny outlook was just what the country needed. Kenny recognising that there is always dark before the dawn also realised “we needed some superficial light just to keep us going”.

Naturally, many speakers pointed out that the country still has many difficult problems to address, but they wanted to say for the record that they hold Enda, the man, in high regard. Even Shane Ross, overjoyed with news that Stepaside Garda station is to be reopened, managed to forget himself for a while to cocentrate on saying lovely things about Enda.

All the while, the retiring Taoiseach studied his fingernails.

The tributes were done in under an hour. The House rose, deputies on their feet applauding this Taoiseach who left “with dignity” and “without a taint of corruption”.

It’s a bit depressing, but such has been our recent history it is a really big deal to have a leader who is not leaving under a cloud.

Enda stayed until the last hand was shaken, the last back thumped and the last forearm punched.

Leo Varadkar, meanwhile, was in deep discussion with a colleague, his back turned to the convivialities beside the Ceann Comhairle’s chair.

Michael Noonan, also leaving the scene although meriting scant mention, was fielding a friendly line of well-wishers. More still were sidling over to Leo with outstretched hands.

The Taoiseach left the chamber at 3pm. He was greeted by staff on the landing outside the main doors. They applauded him as he turned to walk across the corridor, the “Bridge of Sighs”, to his office in Government Buildings.

A short while later, having spent some time with his family, he left for Áras an Uachtarán, there to tender his resignation to the President.

Six years ago, when Taoiseach Enda Kenny walked through the gates of Government Buildings for the first time, it was a source of wonder.

Not because he had led Fine Gael into power again after a lengthy period in opposition. Not because he had taken a party in ruins and rebuilt it through years of late nights and single-mindedness. Not because, having put in those hard yards, he survived a leadership heave when many thought his race was run.

No. The big thing was that a sitting Taoiseach had actually “made his way on foot” to his place of work on his first full day in the job. No more Mercs and Perks, was the subtext. There were breathless reports of how Enda “walked unaided” along Merrion Street, going through the entrance under his own steam.

On his last day, he walked again through those gates, posing for selfies with delighted tourists. “Where are ye from?” he asked one woman.

“I was out there recently.”

Then he was in the car and gone.

Enda has left the building.