Micheál Martin said there is not a guard in the country who believes Gerry Adams was not a member of the IRA in RTÉ's leaders debate. Video: RTÉ 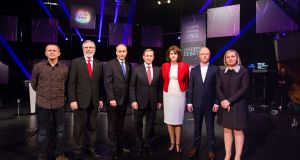 Taoiseach Enda Kenny has firmly ruled out entering coalition with Fianna Fail after the general election.

After days of speculation Mr Kenny said his only proposition to the country was to re-elect Fine Gael and Labour.

The Taoiseach said the election was not the time to cause confusion or instability and it was prudent to return the coalition of Fine Gael and Labour.

He said Fianna Fail was not worthy of Government and the electorate had not forgiven the party yet.

Asked if would do business with Micheal Martin, Mr Kenny replied: “Certainly not.”

The confirmation came after days of speculation about the two parties entering coalition after the general election campaign.

It came during a live television debate between the seven leaders of the main political parties on RTE’s Claire Byrne show.

Fianna Fail leader Micheal Martin and Sinn Fein leader Gerry Adams were exchanged in the frankest exchanges during the debate.

Mr Martin claimed not one guard in the country believes Mr Adams was not a member of the IRA.

He said none of Sinn Fein’s proposals can be taken seriously given Mr Adams denial that he was a member of the organisation.

The Sinn Fein leader urged Mr Martin to go to the gardai with any information he has.

Mr Martin responded: “I talk to Gardai and there is not a guard in the country who does not believe that you were not in the IRA.”

Who do you think performed the best on tonight's #cblive #leadersdebate? The Irish Times' Stephen Collins and Fiach Kelly give their take on how tonight went...

Issues of rural crime, taxation policies and the health service dominated proceedings during the debate.

Mr Kenny insisted the country was in a much safer position than in 2011 but warned against complacency.

The Taoiseach said the Government had inherited a collapsed economy and claimed the challenge was daunting.

He said the reductions in Universal Social Charge would help more people back to work and claimed those who earn the most would pay the most.

The Fianna Fail leader said voters are right to question the political promises by parties.

He said Labour vowed not to increase student fees and abolish prescription charges but had failed to do both.

Tanaiste Joan Burton said Mr Martin left as the palace went down in ruins and he was now like the emperor with no clothes pretending Fianna Fail’s past never happened.

Ms Burton said Fianna Fail was the only thing voters needed to be wary of.

Mr Donnelly said all the independent organisations were warning against reductions in the USC and the Government was ignoring them.

He said the storm clouds were gathering and the Fine Gael and Labour was engaging in populist politics.

Mr Donnelly said the USC was an essential tax base to maintain the tax base.

The Taoiseach said he was proud of some of the achievements the Government had had in the area of health.

He said he would be the first to say the coalition has not done everything it promised it would do during the 2011 general election.

The Fianna Fail leader said the Government made a number of promises in the health service and had reneged on almost every single one.

Renua leader Lucinda Creighton said the problems can be solved if there was the leadership and resources required.

She said the Director General of the Health Service Executive Tony O’Brien had admitted it was an organisation with no vision or strategy.

Speaking after the debate Ms Burton said she was not surprised by the Taoiseach’s refusal to enter coalition with Fianna Fail.

Ms Burton said she has regular discussions with Mr Kenny and knew his position on future Government options.

The Fianna Fail leader said he was out to win the election and was fielding worthy candidates in each constituency.

Mr Martin declined to answer questions about whether he would be the first Fianna Fail leader to not become Taoiseach.