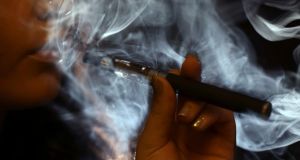 The regulation of electronic cigarettes is proposed in a new Bill published by Fianna Fáil senator Averil Power and Independent senator and consultant oncologist John Crown.

The senators want to see e-cigarettes subject to restrictions similar to those which currently apply to tobacco products, as well as the fitting of child safety caps on liquid nicotine bottles.

“Electronic cigarettes may not be as harmful as tobacco products and might help people to quit smoking. However, a number of concerns have been expressed about them by the World Health Organisation and others,” Ms Power said.

Under the Bill, the advertising of and consumption of e-cigarettes in public places and workplaces would be prohibited.

The sale of such products to under-18s would be prohibited, as would their consumption in vehicles when children are present. The Bill would also provide for standardised packaging of e-cigarettes.

Prof Crown said he always recommended people should stop smoking but in cases where they had not been able to do so, he thought the use of e-cigarettes was preferable.

“ However, there are certain risks specific to e-cigarettes that don’t emerge for traditional cigarettes. For example, e-cigarettes which have wicks that overheat the fluid can produce dangerous levels of volatile chemicals,” he said.

“Poor construction can lead to the inhalation of nickel and lead alloy particles. Meanwhile the material that the wick is constructed from may open users up to health problems like silicosis.”

Prof Crown said the Bill would require the HSE to monitor the available scientific literature to determine what the extent of these risks were, and would empower the Minister for Health to draw up regulations to ensure the well-being of users.

Meanwhile, the smokers’ group Forest Éireann said it was opposed to stricter regulation of e-cigarettes. Spokesman John Mallon said the Government should “resist the temptation to overregulate” the products.

“There has been a lot of scaremongering about e-cigarettes but politicians must wean themselves off the idea that nicotine is bad. It can be addictive but it’s no more harmful than caffeine,” he said.

Mr Mallon said the overwhelming majority of consumers of e-cigarettes were smokers or ex-smokers.

He said restricting the sale and marketing of e-cigarettes could deny smokers access to “an increasingly popular smoking cessation aid”.

Sponsorship by manufacturers and importers of e-cigarettes would also be outlawed under the Bill.