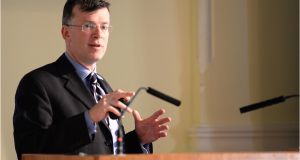 Younger and lower-paid workers are carrying the heaviest economic burden of the Covid-19 pandemic, the Taoiseach’s economic adviser has said.

Prof Alan Ahearne told a meeting of the Fianna Fáil parliamentary party on Wednesday evening that the State needed a balanced economic plan to emerge from the coronavirus crisis and also the impact of a no-deal Brexit.

In a presentation, he said that a transition to a low-carbon economy would affect nearly all sectors of the economy, and that the pandemic had accelerated the move to online and digital services and the automation of work.

“Our SMEs [small and medium-sized enterprises] are underperforming in the areas of R&D [research and development] and innovation,” he said. “How do we change that?” He said education, retraining, upskilling and a jobs-rich public investment was needed.

Mr Ahearne, who was recently appointed as Micheál Martin’s economic adviser, said the record €9 billion public investment commitment for 2021 could provide an opportunity. However, he said there were questions on what city centres would look like in future, and what roles remote working, digital hubs and regional clustering would have in the post-Covid economy.

He said the short-term goal was to “support the economy through the pandemic and no-deal Brexit and drive a jobs-led, balanced recovery”. In the longer term there was a transition to a low-carbon digital economy.

Mr Martin said the risk of the impact of a no-deal Brexit was huge. He also accused Sinn Féin of being “consistently negative and cynically inciting matters in the Dáil”.

Minister for Public Expenditure Michael McGrath said that despite the “perfect storm” of Covid-19 and Brexit, the budget in early October was not going to be “slash and burn”.

He said the focus would be on public investment in health and housing and the programme for government. He said the €9 billion allotted for 2021 would have huge potential for creating new jobs.

Their priorities include plans to commence an insurance reform programme to reduce costs, plans to bring forward proposals on a right to disconnect in 2020 (the legal right to avoid work emails outside working hours), proposals to agree “Ireland’s first ever national remote policy”, the commencement of a review of student supports and grants and the publishing of a policy paper on regularising the status of undocumented migrants. Ministers also pledged to legislate to defer the planned increase in the pension age.