Fiach Kelly and Mary Minihan tell us how the coalition used their budget to deliver a message to voters. Video: Kathleen Harris 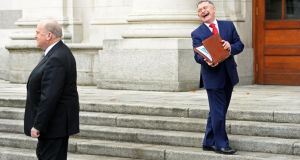 Families are the main winners from measures in Budget 2016, with free GP care extended to under 12s, additional free pre-school childcare and a €5 increase in child benefit.

Significant cuts to the USC, including a 1.5 point cut in the main rate to 5.5 per cent, are the key change delivering increases in take-home pay.

The Government has increased the entry point at which workers must pay the universal social charge (USC), and reductions have been announced for some USC rates.

The entry threshold to the unpopular levy has been raised to €13,000 from the previous level of €12,012, and those eligible for the lowest rate of USC will now pay a 1 per cent levy rather than the previous 1.5 per cent.

This will relieve the tax burden for around one million middle-income earners, according to the Minister for Finance.

Furthermore, USC is to be “progressively” abolished over the coming years, however, a defined timeline was not mentioned, he said.

This is being done to entice more inward investment in Ireland and to entice emigrants home, according to Michael Noonan.

As anticipated, the National Asset Management Agency will provide an additional 20,000 housing units over the next five years, equivalent to 80 new units each week.

The Government is to freeze the amount homeowners pay in local property taxes until 2019 and is to exempt homes affected by pyrite from the levy.

The vast majority of these will be in the Dublin region, and three-quarters of them will be “starter houses”, Mr Noonan said.

The question of funding for housing had proven a divisive issue within the Cabinet, according to reports, and neither Mr Noonan nor Mr Howlin mentioned rent-control measures or certain building incentives championed by Minister for the Environment Alan Kelly.

However, there will be an extra €17 million diverted towards providing emergency accommodation, bringing the total to €70 million, and €500 million will be made available over the next year to build and acquire new homes.

In line with predictions from Tuesday, the free GP scheme will be extended to include under-12s from 2016.

Other measures likely to be welcomed by families are an increased allocation to the Department of Children and Youth Affairs; the early childhood care and education scheme has been extended, meaning children between three and five- and-a-half are now eligible for free pre-schooling.

In addition, two-weeks’ paternity leave for workers will become a statutory requirement as of September 2016.

Extra funding for the Department of Education will create 2,260 new teaching posts in the next year, which includes 600 additional resource teaching positions. This will bring the pupil-teacher ratio in schools down from the current level of 28:1 to 27:1.

Some 600 additional posts will be created within An Garda Síochána as part of a €2.2 billion allocation to the Department of Justice.

As expected, the Christmas bonus will be reinstated to 75 per cent of the pre-abolition rate for all social welfare recipients.

The respite care grant of €1,700 has been reintroduced, and the minimum wage will increase by 50 cent, from €8.65 per hour to €9.15, according to Minister for Public Expenditure Brendan Howlin. There will be a €3 increase in the old age pension along with an increase of €2.50 in the fuel allowance, bringing the payment up to €22.50 per week.

The pension fund levy of 0.15 per cent is also to end this year.

The Capital Acquisitions Tax threshold has also been increased to €280,000 from the previous level of €225,000.

The Capital Gains Tax is to drop from 33 per cent to 20 per cent for entrepreneurs selling their businesses, up to a limit of €1 million, while an earned income tax credit of €550 will apply for those who are self-employed including entrepreneurs and farmers.

The motor tax system has been overhauled: From now on five bands will apply compared to the previous regime of 20 different rates. These five bands will vary from €92 at the lowest level to an upper limit of €900, representing savings of over €4,000 for some hauliers who were paying in excess of €5,000.

Ireland will introduce the first OECD-compliant Knowledge Development Box in the upcoming Finance Bill, which will mean a reduced corporation tax rate of 6.25 per cent for eligible technology and software firms.

The measures are part of the first expansionary Government budget since the Fine Gael-Labour coalition came to power in 2011.

Outlining his view of the Coalition’s achievements, Mr Noonan said this Government had made significant progress in reducing the size and cost of servicing the national debt.

He said in addition to bringing the public finances under control, specific initiatives such as the Promissory Note transaction, the extension of maturities on the State’s EU loans and the early repayment of the IMF loans has resulted in real and substantial savings to the Irish taxpayer.

Mr Noonan also confirmed excise duties on a packet of 20 cigaretteswill rise by 50 cent from midnight and said this will afford the exchequer an additional €61 million in a full year. A pro-rata price increase will apply to other tobacco products.

The Minister said this would be the only tax-raising measure in the Budget.

His party colleague Barry Cowan TD rounded on the apparent failure of Government to impose rent certainty measures, which was the cause of an alleged falling out between Mr Noonan and Mr Kelly.

“Through this budget the Government is perpetuating the mindless situation where families are being forced into emergency hotel accommodation, rather than allowing them a marginal rise in their rent supplement,” he said.

“This is nonsensical and sums up the Government’s haphazard response to the housing emergency... The explosion in the cost of renting is as a result of the inability of this Government to take any policy action to address the growing housing emergency.”

Despite more teaching posts and a planned reduction in the pupil-teach ratio, Sinn Féin’s Jonathan O’Brien described the education budget as “underwhelming”.

“This budget is a missed opportunity. They could have reduced the student contribution fee and increased capitation grants,” he said.

“Most of this budget is dressing up the minimum they actually need to do as new to make it sound like a new initiative, and it falls far short of the mark.”