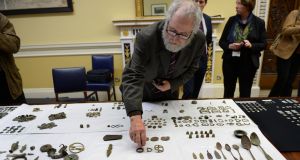 The National Museum of Ireland today unveiled a recently recovered collection of some 900 artefacts which it said had been looted from historical sites around Ireland by “treasure hunters” using metal detectors.

Many of the artefacts were found by police in England following a tip-off from the British Museum after a hoard of medieval items was illegally taken into the jurisdiction. They were reclaimed in the Norfolk area.

Ned Kelly, keeper of Irish antiquities at the National Museum of Ireland, said an increasing number of “treasure hunters” were purchasing metal detectors and using them to find and then pillage artefacts from historic sites in order to sell them on to dealers or auction them off on the internet.

Similar historic objects were making hundreds or thousands of euro when sold, he said.

“There has been an upsurge in treasure hunting in an orchestrated campaign and we can see dealers of metal detectors are at the back of this,” Dr Kelly said.

The discovery was a bittersweet one, he said, as much of the context surrounding such items was lost when they could not be traced back to the site on which they were found.

Ron Byrne, of the Amateur Metal Detectors Association of Ireland, said people who went to historic sites to search for archaeological items were criminals but that most people saw metal detecting as a pastime involving getting out in the open and exercising.

He said some criticism of the activity was “gung-ho” and unfair. “It’s the same as seeing a person use a Ford Transit to get away from a robbery and then saying everyone who has a Ford Transit is a criminal.”

In this case, the objects were largely from the north Tipperary area. They have been traced back to a British national who lived in the Tipperary area prior to his death last year. A friend of the man, who lives in Britain but assisted him in his searches, has been cooperating with the authorities.

Some of the military buttons have specific links to Tipperary such as a silvered button of the Lower Ormond Cavalry, a regiment commissioned in 1796 under the command of Captain Otway Toler. There is also a uniform button inscribed ‘County Tipperary Gaol’, and saddle mounts identifying local makers such as Gleeson Brothers, Nenagh.

Terry Allen, director of the Department of Arts and Heritage’s monuments service, said an increasing number of reports relating to such activities were being received from people living near heritage sites, particularly in the midlands.

“It takes place through subterfuge in and around unmanned monuments so it’s difficult to actually know the full extent of it,” he said. “Not alone is it the loss of objects they find but there is damage also to the underlying archaeology.”

Garda Declan O’Brien, of the National Bureau of Criminal Investigation arts and antiques unit, said metal detecting for archaeological objects in any form was illegal and could be punished with a prison sentence of five years on indictment or a fine of up to €10,000.

The practice is forbidden under the National Monuments Act unless you have a licence approved by the Department of Arts and Heritage.

Garda O’Brien said the man spoken to during the investigation into the artefacts had cooperated with the authorities and that he was satisfied all the objects he had been given were returned.

Parties to continue talks with Sinn Féin despite Drew Harris’s IRA comments 01:40
The view from Clondalkin: If Sinn Féin don’t get in, ‘there will be marches’ 01:00
Who was L’Arche founder Jean Vanier? 01:00
Medical Council makes fresh finding against obstetrician Peter Van Geene 01:00
Italy has first coronavirus death 23:44