‘Main deterrent cannot be being caught by the gardaí,’ says road traffic watchdog 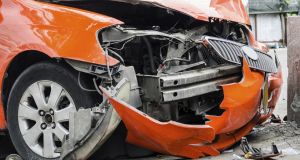 To date 118 fatalities have been recorded on Irish roads this year, four more than the same time last year. File photograph: Getty

Three-quarters of all people who die in road fatalities during off-peak hours are over the drink-drive limit for alcohol, fresh research reveals.

The equivalent figures are 74 per cent of drivers, 49 per cent of passengers and 56 per cent of pedestrians who are killed during peak hours are male.

The largest number of fatalities between the off-peak hours are males under the age of 44.

Deaths on Saturday and Sunday during the off-peak period account for more than half (51 per cent) of all driver fatalities. By contrast fatal collisions during peak times are evenly spaced throughout the days of the week.

The number of young passengers who die in off-peak collisions is also significant. Passengers under the age of 25 account for 73 per cent of such deaths.

The analysis is carried out by the Road Safety Authority (RSA) of 836 fatalities and 781 fatal accidents (some of which include multiple deaths) between 2014 and 2018 on the Republic’s roads.

Just 4 per cent of traffic volumes occur between 10pm and 6am yet the period accounts for 27 per cent of all road deaths. Traffic incidents during this period are also much more likely to be deadly as off-peak injuries are just 17 per cent of the total.

RSA chief executive Moyagh Murdock said it was “hard to believe” that there would be such a concentration of road fatalities when traffic is lightest on the road.

“It is shocking the number of people who have consumed alcohol at these periods of time and are subsequently involved in collisions. Anybody who thinks it is alright to have one or two and still drive, think again. These numbers tell a different story.”

She said the RSA had been engaged in recent years in trying to target younger road users with campaigns to ensure that drivers and passengers use seat belts.

“Until they reach the age of 25, they really are risk-averse, so they will take chances,” she said. “We really are depending on parental pressure, peer-influence and common sense. The main deterrent cannot be being caught by the gardaí.”

She suggested that the Republic might implement the same law that is in Northern Ireland where newly qualified drivers cannot carry passengers unless they are family members. These strictures exist for six months after they pass their driving test.

RSA research manager Velma Burns said there is a “psychological and biological aspect to young male drivers” and that risk-taking is “hardwired” into the psyche of many young men.

She said it is important to educate young people and that the process had already begun as road traffic fatalities were at their lowest level on record in the Republic last year.

To date 118 fatalities have been recorded on Irish roads this year, four more than the same time last year.