Woman, dog airlifted off Sandymount strand after tide comes in 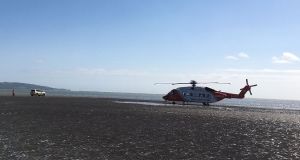 The Coast Guard helicopter which was tasked on Wednesday morning to lift a woman and her dog from a sandbank on Sandymount strand when they were cut off by an incoming tide.

The Coast Guard has appealed to people using the State’s beaches - particularly popular seafronts in Dublin – to be aware of the times of low tides.

The appeal comes after a Coast Guard helicopter was tasked on Wednesday morning to lift a woman and her dog from a sandbank on Sandymount strand when they were cut off by an incoming tide.

It is understood the woman who was out walking with her dog became surrounded by water and used a mobile phone to contact a family member who contacted the emergency services.

A Ruff rescue on Sandymount Strand this morning!
(Sorry, we couldn't help ourselves)
A person walking a dog, Jessie, was cut off by a quickly incoming tide, Rescue 116, @RNLIDunLaoghair, Dun Laoghaire Coast Guard and units from @DubFireBrigade were tasked to the scene. pic.twitter.com/d9m8yMPZSV

The Marine Rescue Coordination Centre dispatched a coastguard helicopter and Dun Laoghaire Coast Guard and sought the help of the Dun Laoghaire Lifeboat which was also dispatched. On shore, the resources included the Dublin Fire Brigade and paramedic, emergency first responders.

Ultimately the helicopter was able to make a landing on the sandbank and the woman and her dog were taken the short hop to shore.

The Coast Guard said the speed of a changing tide could catch unawares those who were out walking on sandy beaches and what looked like a dry and safe stretch of beach could very quickly be surrounded by water amid rising tides.

The service asked those intending to take a walk on the beaches familiarise themselves with the tidal conditions in the area and the particular times of high and low ties in the vicinity, which are accessible on a number of websites such as tide-forecast.com/locations/Dublin-Ireland/tides/latest.

If walking at low tide, or close to it, people are advised to keep an eye on conditions and where possible to stay above high water marks.