Promotion is backed by semi-State bodies such as Coillte, Bord na Móna and the ESB 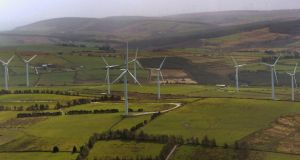 The campaign will highlight that Ireland imports 85 per cent of its energy requirements. Photograph: David Sleator

The campaign is funded by the major wind energy companies here and semi-State bodies such as Coillte, Bord na Móna and the ESB. The campaign has been devised by advertising agency Rothco.

It will invoke onetime US president John F Kennedy’s speech to the Houses of the Oireachtas in 1963 in which he said Ireland can become a country leading the way in the world.

Entitled The Power to Power Ourselves, the campaign will highlight that 85 per cent of Irish energy is imported and that wind energy is a renewable source of energy that can reduce that figure.

“Yet Ireland is surrounded by a clean and renewable resource that would vastly reduce imports to meet our energy needs, now and into the future.”

“We need to make sure there is a factual discussion around the energy situation that Ireland has at present and there are hard choices to be made,” he said. He said a recent poll showed that most Irish people are not aware where the country’s energy comes from. He said that during high winds, wind energy generates half the electricity in the country.

“Recently we’ve seen a concerning escalation in false and misleading information about wind energy from some quarters,” he said. “We’re hoping this campaign will help create greater certainty while also instilling a sense of pride in what is one of Ireland’s fastest-growing indigenous industries.”